Going for a ride | Environment | Halifax, Nova Scotia | THE COAST

Going for a ride

Transit issues in the HRM continue to make the city less green. It will take a change of attitude or of political representation to make a difference.

Launched in the fall of 2009, the Halifax Regional Municipality's five-year strategic operations plan laid out the city's future transit initiatives, full of good ideas to provide better service for people moving from point A to B in the HRM. It charts projected population growth, assesses bus routes and suggests service changes and improvements.

But its laudable goals have been overshadowed by more recent developments---the Larry Uteck interchange and Washmill Lake extension---$20 million going towards road building that could have been put into transit or affordable housing on the peninsula---plus plans in the works to widen Bayers Road. All infrastructure spending that speaks to the car-driving, gas-guzzling society in which we live.

"We need a culture that walks more," says Jen Powley, the HRM coordinator of the Ecology Action Centre's transportation issues committee. Her solutions to the problems of transit are sound and simple. "We need to walk or bike to where we work. We need to work on prioritizing transit corridors and putting busses on the routes that really work at high frequency. So people do shift from their cars and stop thinking of buses as 'loser cruisers.'"

To make that happen will require more affordable housing in downtown Halifax and Dartmouth. HRM homes cost an average of $262,000 in 2011, out of the price range of a lot of families starting out. But then consider the added bills associated with owning a vehicle: "If you look at how much you're paying on a car, or two cars, you might as well put it on your mortgage," suggests Powley.

None of this is to say that HRM's commitment to increasing ridership isn't a good idea. And the Smart Trip E-Pass, a pilot project starting in May, could really help (provided it gets the go-ahead from council). The idea is that participating companies would be able to offer employees $630 for an annual transit pass---the value of 11 months of bus and ferry trips---and the employers would make up the difference.

"The E-Pass is a step in the right direction," says Powley, who also credits Metro Transit for starting to use Twitter to inform its ridership. "But Metro Transit had already been involved in an E-Pass program with the EAC three years previous. I hope they are not re-inventing the wheel."

In the past the issue was capacity, so the hope is that if enough businesses sign on, everyone wins. Powley also suggests Metro Transit "also needs to do an update in timing of its routes."

One of the best new ideas for a change in attitude to transit is the Blue Route initiative, a plan to improving bicycle infrastructure, the product of a partnership between the Nova Scotia Bikeways Coalition, Bicycle Nova Scotia, Mountain Equipment Co-op and the province.

"The interesting thing about the Blue Route initiative is that it has gained a lot of traction with powers that be," says Peter Williams of Eastwind Cycle. "There is cabinet support, many in the NDP caucus are aware of what it is and understand that it is a relatively simple project in terms cost to political benefit ratio. Another key to success is general acceptance by Transportation and Infrastructure Renewal and support from Health and other provincial departments."

For more information, a PDF is available at halifax.ca/boardscom/documents/Bikewayssummary.pdf, or visit bikeways.ca. 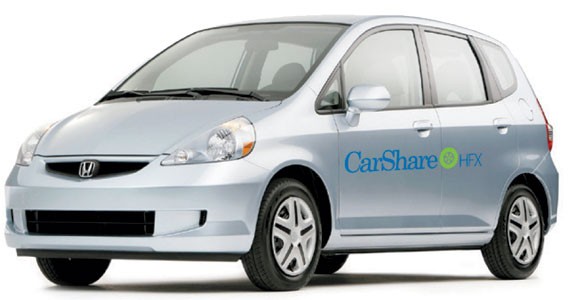 In 2011, CarShareHFX partnered with Communauto---Canada’s first car-sharing organization, founded in 1994 in Montreal---to “create some efficiencies,” as Pam Cooley, president of CarShareHFX explains it, allowing the company to reduce its fees.

“It used to be that a personal or family membership was $200 annually,” says Cooley. “Now it’s down to $39 per person.” If you visit the company’s website, you’ll find two programs to choose from, reflecting the different way people use cars. There’s the open program, which costs $39 annually for anybody, plus a usage fee of $5.95 an hour plus $.17 per kilometre. Gasoline, maintenance, bridge passes and insurance is part of the price. Then there’s the liberty program, which is for committed car sharers and offers a higher rate of annual fees, but then more savings on the hourly rates, as low as $2.75. Just past its third anniversary, the company now has 13 vehicles in the fleet. And it has other deals. For example, Killam Properties and Southwest Properties staff and residents can get $1 off the hourly fee. There’s free parking at the Waterfront Development corporation and the Port of Halifax park lots, as well as car-sharing contracts with the provincial government and the HRM.

Furthermore, CarShareHFX partnering with Metro Transit with the E-Pass, so that anyone who uses the E-Pass will also have a big discount on car usage. For more information on CarShareHFX, you can find it at 2459 Agricola Street, 406-7439, or online at carsharehfx.ca.