Go local in the South End

Halifax’s peninsular south end is more residential area than shopping district. But there are pockets of local business activity if you go looking.

Before there was the internet, there was Atlantic News (5560 Morris Street, 429-5468), full of newspapers and magazines from around the world. The legendary newsstand remains a destination for your periodical needs---often going directly to the publisher to get titles you’re looking for---and more besides. Co-owner Michele Gerard shows us the new stationery they have in. Since it’s far too early for Christmas spirit, we liked this option by Offensive + Delightful: “Here’s your fucking Christmas card, I hope you’re happy.” Atlantic News also carries gorgeous cards from Halifax artist Wendie Poitras and Sable Island photographer Damian Lidgard, if that would make you happy.

Uncommon Grounds is a local coffee chain success story, and it’s considered by many to be the hippest java joint in town, decor-wise at the very least. The flagship South Park location (1030 South Park Street, 431-3101) boasts a New York loft-style design along with a sweet collection of comfy leather and suede couches and chairs on which to lounge while you sip and snack. UG has its own line of organic, fair trade coffee and mugs, and also sells chocolate from its sweets-store sibling Sugah! Another UG spin-off is the toy shop Uncommon Kids Gear, with a branch located right beside the cafe (1030 South Park Street, 431-8543). 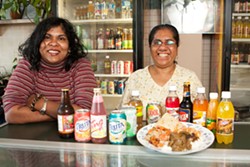 Having worked in Guyana as a food inspector, Rani Singh (above, right) has been around food preparation for years. When she moved to Canada, she made her dream of owning her own eatery a reality, by taking cooking classes and opening Rani’s Curry and Roti Stop (5280 Green Street, 404-3440), the only Caribbean joint in the area. That was in 2004, and business continues to be good as people have taken to her flavours. “We’re not making it mild for Canadians. We want it authentic. When people travel to the Caribbean they want it when they get back.” Check out changes at Rani’s in early 2010 when they’re hoping to get licensed. “A lot of people are asking for Caribbean alcohol.”

“Things you can’t buy at Chapters,” is part of how John Townsend---who owns Schooner Books (5378 Inglis Street, 423-8419) with his wife Mary Lee MacDonald---describes what it is they do. The shelves are full to the ceiling with antiquarian and out-of-print titles, lots of Canadiana and history books. They’ve been putting out catalogues for 25 years, and lately are reaching more customers from across North America, Europe and Australia through SchoonerBook.com. Townsend recognizes his industry is very much still in flux. “There used to be trends in books, but there are not now,” he says. “The price of books is declining. It benefits the book-buyer, it’s phenomenal for them.” He seems resigned to never knowing what will work in his business but continuing to do what he enjoys. “After all these years, we still haven’t a clue. You have to compete with the world.” He adds, with a dry chuckle: “We hate that.”

The corner of South Park and Fenwick Street is currently a pit that looks a little like the Kimberley Diamond Mine. Filled with enormous earth movers, the stench of diesel and a collection of concrete discs, the mess is a sewer project that began in May 2008, digging up Fenwick all the way to Queen. “For a year and a half it’s hurt my business,” says Dan Joseph, president of Darrell’s Restaurant (5576 Fenwick Street, 492-2344), who has been working in the kitchen again full-time in order to keep expenses down. Joseph, pictured at left, says that the dust and noise of the construction cost him "an extremely large amount of lost revenue," during his busiest months, when customers would want to sit on the patio. He’s angry at the time the dig has taken, as well as the bureaucracy he faces when he tries to get answers about the delays. “The city says it’s not our problem. The water commission says it’s Dexter [Construction]. No one is taking responsibility for why it’s taking so long. I get notices every day and none of them have ever been accurate. I’m sure there is something I could do legally, but what it would cost me and what I’d get in return would probably double the damage. The workers don’t even come in here to give me their business for lunch. Not one of them.” If there is a silver lining here, it’s those patrons who have stuck it out through the work. “Thank god for the very loyal Darrell’s customers.”

Greenlyph Computers (1078 Queen Street, 422-2453) is basking in the glory of its victories in our Best of Halifax readers’ poll, as Best Computer Store and Best Tech Store. Besides that, explains co-owner Wade Prue ---the other is Jeremy McNeil, pictured above---the shop’s been busy doing Windows installations. “Many people held off upgrading their operating system,” he says, with all the bad buzz around Vista. “The word of mouth on Windows 7 is fantastic. People are a lot more enthusiastic.”

Strolling near the tiny park at the corner of Barrington and Inglis, you may have seen a collection of quotes in the windows of a new business at 1014 Barrington Street, including “You won’t need teef to eat our beef,” and “Put some south in your mouth.” It’s the future home of Boneheads, run by restaurant industry veteran Cindy Wheatley. Hoping to open by the end of November, Wheatley’s planning a casual-dining lunch and dinner spot offering a menu of delicacies from the American south: pulled pork, beef brisket, ribs, smoked chicken, hand-cut fries, dirty rice, sweet potato fries, apple ‘slaw and even a little mac and cheese. Makes all sorts of sense a place like this would open in the south end, don’t it?

“Astronomically busy,” is how service technician Chris Cobb describes the current state of affairs at Todd’s South End Car Care (5368 Inglis Street, 425-2400), with the mechanic shop booked two weeks in advance. He says the general feeling is that “private garages like this one are recession-proof,” as people look to get more life out of their cars rather than buying new ones. “It’s a steady trend over the year, it’s like we’re riding a wave, but the wave just doesn’t stop.”