Shoptalk scratches the surface of what dear old downtown Dartmouth has to offer. 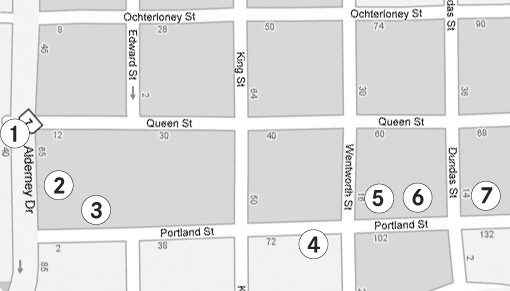 On the ferry, I squint in the afternoon sun. Ahead of me lies Dartmouth, spread out before the bow of the good ship Woodside II.

To the right is the site of the proposed Queen’s Landing development, a hotel-condo-office project that many hope will continue the revitalization of downtown Dartmouth. The project seems delayed by the global financial crisis, although locals insist it is on track. But what, I wonder, will happen to the venerable Dartmouth Curling Club?

Ten minutes across the water and I’m deposited in the airy Alderney Landing (2 Ochterloney) ferry terminal, the beginning of my visit to the city across the harbour.

I meet Sherry Smithers, owner of Oliver's Deli (461-9516). She's been on the ground floor at Alderney Landing for over two years, offering meats from Sweet Williams farm in Stewiake, fresh every Saturday morning at 5:30am, just before the Dartmouth Farmers' Market. What isn't sold on Saturday is frozen and available in-store through the week. She also has fair trade coffee and her own delicious lunch concoctions; cabbage rolls, homemade soups, seven kinds of sausage rolls. "I do a lot of lunches," she says. "My price is reasonable. You have to be these days."

Smithers is largely responsible for the activity going on in Alderney Landing at the moment, having been the former owner of the place next door, Ducky's (464-3825), which was once up on Portland. She brought it down and livened up the plaza, before selling the restaurant to one of her waitresses, Maureen Briand. Ducky's has a few customers this mid-afternoon, with the staff looking forward to the warm weather as an excuse to open their patio on the water.

Around the corner in the same hall is Casaroma Wellness Centre (464-2272), a shop for alternative health products as well as treatments and classes---everything from Reiki to colour therapy, aromatherapy to aura analysis. Next door was once the home of Maple Farms, though it recently went into receivership and is being taken over by Meadowbrook Meat Market (902-538-1106).

"We share a lot of the same clientele," says Lee Fisher, co-owner of Casaroma, which is selling the antibiotic-free pork, beef, chicken and sausages out of their space. "Healthy meat, healthy lifestyle."

Leaving the atriums of the landing, I cross the street, and am drawn in by the smell of delicious Italian cuisine at La Perla Dining Room (73 Alderney Drive, 469-3241). The restaurant has been run by James MacDougall and his mother for 26 years, starting as The Pearl Café, a soup and sandwich joint that was next door above what is now Celtic Corner. The current location is the oldest commercial brick building in Dartmouth, built in 1849 with brick from England. It's been renovated---a balcony over Alderney Drive opened last summer. When will it open this year? "At this rate, hopefully August," says MacDougall, chuckling. "I'm ready to go. Somebody can sit out there whenever they want."

When I stop in at Celtic Corner Public House (69 Alderney Drive, 464-0764) for fish and chips, I wonder how many of the patrons during the busy lunch hour are having their meals paid for by city hall, with the school board, the fire department and various city government offices located nearby. I'm given a tour of the Celtic Corner roof deck, accessed through a series of maze-like passageways and staircases.

Rhonda Haley-McKinnon has been running the Gothic/Medeival/Pagan/Egyptian/Vampire boutique Morrigan LeFay's Mystical Gifts (79 Alderney Drive, 444-8267) for seven months. "March was horrid... a lot of time by myself," says Haley-McKinnon, reporting on business in the store. "It's a good thing I like me." She's seeing things pick up, though, and I'm impressed by a set of Sauron's gauntlets---replicas from the first Lord of the Rings movie.

When you turn the corner and proceed along Portland Street, what you get are a collection of scrappy local businesses, many of which have moved up and down the street as business has waxed and waned, but they're sticking it out in an area that has seen tough times. It's great to see. Aside from the banks and the drug store, there are no chains on the downtown stretch of Portland.

At Uptown Girl Fashion Boutique (45 Portland, 435-4494) owner Brenda Dooks blames bad weather and snowbirds for slow business over the winter, but is happy about the ongoing revitalization of downtown Dartmouth and more police presence on Portland. "I'm much busier here than I ever was in Cole Harbour [at her old location]," she says.

A little further along is Full Circle Veterinary Alternatives (61A Portland, 461-0951), Third Eye Blind (67 Portland, 406-3640) for your gaming and fantasy toy needs, then a pawn shop, a barber shop, a flower store, a computer repair store, a laundromat/bar, a yarn store, convenience stores and camera place further up the street. 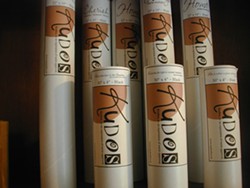 I'm greeted by the angry insect buzz of the ink needle in Dragon & Butterfly Tattoo/Piercing (86 Portland, 434-4199). Proprietor James Woods is suspicious and demands my credentials, but welcoming when he sees I'm legit. He employs a single artist, and she's always busy. His competition is further down the street, Oceanic Art (121 Portland, 466-8288).

Kudos Signs & Gifts (101 Portland, 444-7688 ) is new, open since December, for all your signage needs. "The [area] store owners have been very supportive," says owner Nichla Pinsent, busily sanding a window frame. "I love it down here." Hours are flexible---Pinsent has seven children, so snow days have been a struggle over the winter---but the store phone is forwarded to her cell if the shop is closed.

At 111 Portland is a mystery: a tiny '50s-style diner, closed for years, but looking as though it's in perfect shape and could be in business tomorrow.

At Allure Hair Lounge's (115 Portland, 464-0606) four stylist/owners are seeing an increase in business with spring on its way. They also do massage and aesthetics, and though they welcome walk-ins, but you're better off to call for an appointment.

The last shop I visit, towards the end of the downtown strip, is Radical Leathers & Sun Tanning Salon & Swimwear (137 Portland, 464-0404), which is getting out of the leather goods, but still does the bikinis, the tanning, the bongs and paraphernalia and the urban street wear, including Blac Label, Artful Dodger 1816 and Shattered, designed by death row inmates.

My mission complete, I head back toward the ferry. With the sun in my face and the warm welcome I received from the local denizens on my mind, it occurs to me, hey, maybe I only scratched the surface of what Dartmouth has to offer.