Go for the Gold

Gold Medal Plates has local chefs facing off in a little healthy competition to raise funds for Canadian Olympic athletes. 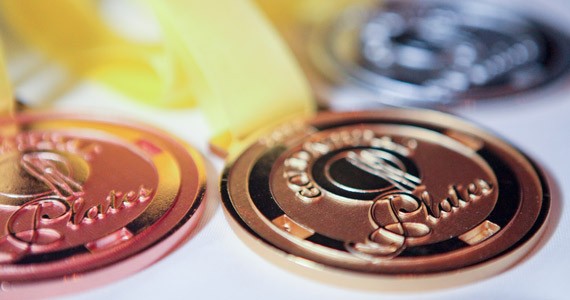 Gone are the days when serving something on a silver platter was the best you could ask for, on Thursday, October 17, Halifax is getting Gold Medal Plates.

A fundraiser for athletes and a fine dining culinary competition that unites the competitive spirit of the Olympics with the culinary skill of some of Canada's best chefs, Gold Medal Plates takes place in 11 cities across Canada.

"It's exciting to have the event back in Halifax and to showcase our talented chefs, quality, authentic Nova Scotia products," says Christine White, Taste of Nova Scotia's director of communications and events. "I think this event really takes pride in showcasing the best of our country. We have a lot to be proud of as Canadians, and Nova Scotians. And Gold Medal Plates makes that a priority and a point of pride."

While there are a number of facets to the event, the idea is simple. Started in 2004, Gold Medal Plates is an event meant "to celebrate Canadian excellence in food, wine, sport and entertainment and to raise funds for Canadian Olympic athletes," says co-founder Karen Blair. "Gold Medal Plates is not a boring gala dinner with a catered broccoli and chicken meal. We call it the greatest Canadian kitchen party because guests get a chance to wander from chef station to chef station trying the different dishes and wines and interacting with other guests and the Olympians."

Around 20 Olympic athletes---like Dartmouth canoer Andrew Russell, Halifax snowboarder Sarah Conrad and three-time gold medal (plus one bronze for good measure) winning, Canada Sports Hall of Fame legend Marnie McBean---will be on hand as examples of what we all should, and don't, look like after a night of carbo-loading on dishes from the nine competing chefs.

Those chefs are from all across Nova Scotia, including Luis Clavel from Halifax's Seasons by Atlantica, Roland Glauser from Shelburne's Charlotte Lane Cafe and Jason Lynch from Le Caveau in Grand Pré.

White sees some similarity between the struggles faced by Olympic athletes and competitive chefs. "Any event that profiles our chefs, our athletes, and the amazing things we are doing locally and nationally is fantastic," she says, noting the importance of not only supporting, but simply believing in their talent and hard work. "We are a community---and being a part of that community is celebrating accomplishments together. But also I think it's each individual person's responsibility to spread the word about the talent, the authentic people, places and products we have in Nova Scotia and Canada."

"One thing that I thought was remarkable was how closely Olympians and top chefs can relate," he says. "The commitment and dedication to excellence that the chefs displayed was on the same level as Olympic athletes. They were not just there to enjoy the experience---they wanted to win! They never wavered and were not the least bit intimidated by their competitors. Although it was not an athletic event, you could feel the pressure and tension in the air."

"We hope to create a tangible and exciting evening for the Halifax guests in which they walk away, thrilled with their experience," says Blair. In the past decade the Gold Medal Plates project has raised over seven million dollars for programs like Own the Podium. Halifax's event is raising funds for Support4Sport.

The art of charcuterie

5 Cottages near Halifax for your next relaxing holiday PAID CONTENT

Booze you can use