The most inspiring labour story this year was a queer-owned, queer-focused venue where the city gathers to organize, socialize and celebrate. 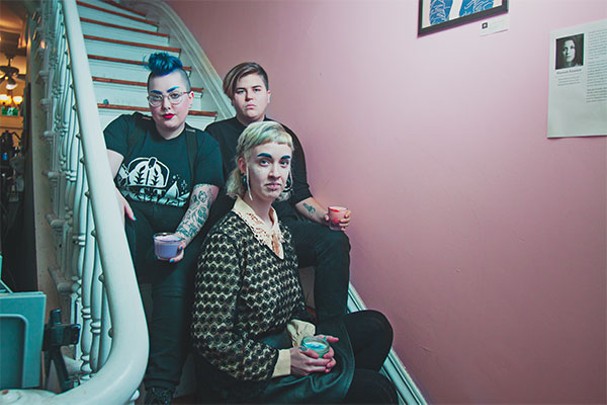 The workers at the Smiling Goat’s Spring Garden Road location weren’t given the day their cafe closed last April. The building’s landlords—Just Us! Coffee Roasters, which sold its two unionized HRM cafes to Smiling Goat’s scorned owner Kit Singh in September 2017—changed the locks just a few hours after letting the staff know they’d be doing so.

In a way, it wasn’t much of a surprise. The news came amidst months of organizing and publicly battling Singh for unpaid wages alongside their fellow baristas from the Smiling Goat’s five other locations. But it still felt like another jarring dip in the rollercoaster ride of 2018. The next day staff were called to a meeting at the Service Employees International Union office where a bold idea was pitched: Could they keep the space alive by opening their own cafe?

“It was a really fast mental shift but finally we felt a little light at the end of the tunnel. We had this opportunity to take this space we’d all been working in and make it our own,” says Glitter Bean Cafe worker/owner Lorelei Carey. “We’d been more or less running this place from a managerial standpoint for a few years now with little-to-no management intervention, but to finally be able to explore what we want this space to mean was really exciting.”

Though still very much in the middle of a labour dispute, the location’s nine baristas—now worker/owners at the cooperatively run cafe—spent the next few months preparing to relaunch and revitalize the place they had poured so much of themselves into. There’s making lemonade from life’s lemons, and then there’s the Glitter Bean—a queer-owned, queer-focused venue to “organize, socialize and celebrate.”

“I personally have been working in this spot over six years. I know this place, I know the customers, my coworkers mean the world to me and we created this little piece of heaven here having a queer-centred workspace,” says owner/worker Charlie Huntley. “Half of us are trans, 90 of us are queer and to find that sort of solidarity is rare, and it’s something we didn’t want to let go.”

The cafe opened mid-summer to major love from the public. Glitter Bean immediately became not just a spot for hot coffee, quiet reading and hangouts, but a meeting place, event space and what Carey calls somewhere “people could come together in safety.” Huntley says they’ve “never had so many people tell me they were proud of me in rapid succession.”

As the year comes to a close, Glitter Bean’s former Smiling Goat employees are still owed a lot of money—upwards of $10,000 in wages—from Singh. They’re also dealing with an ongoing legal dispute with their ex-boss. While closure won’t come until well into 2019, Huntley and Carey hope that their long, hard fight for fair treatment gives a glimmer of hope to folks facing similar issues at work.

“There’s nothing that will teach a young person entering the workforce that they have the right to demand their rights,” says Carey. “People who are in a position to be able to fight for their rights—whether they know how to do so or have the support to do so—making that public so other people know they can do it too is really important. That was another reason we all stayed, part of it was to take a stand against Kit and stop the cycle of abuse he was perpetuating because it was a pattern of his.”

“It is a privileged perspective to think people can just quit their jobs and go to the next one. It doesn’t reflect the economic realities of Halifax or gender non-conforming people— unemployment rates are much higher for us. Finding a job that respects us and doesn’t erase us is very hard,” says Huntley. “There were so many reasons to stay and fight this out. And there were moments where I was like, ‘I don’t know what the end goal is here.’ But it’s amazing that it culminated the way that it did.”

What’s your biggest question about sex, dating and love?