Child’s play: Not all the gifts in the kids’ giftshop or the toys in the children’s toy store are for the young ‘uns. You’ll find a few great gift items for your over-18 friends in these local stores, too. 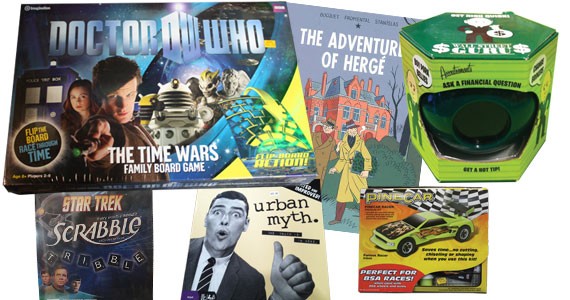 The Adventures of Hergé by Jose-Louis Bouquet, Jean-luc Fromental and Stanislas Barthelemy, $20
An illustrated biography of Georges Prosper Remi, better known as Hergé, the creator of The Adventures of Tintin, from Montreal publishers Drawn & Quarterly. Tintin and his trusty pooch Snowy will be on the big screen later in December with a new sleek, modern look, thanks to Steven Spielberg and motion-capture animation, and this book looks at the Belgian creator, who wrote and drew the comics to much acclaim from 1929 through to the 1980s.
Monster Comic Lounge, 2089 Gottingen Street, 429-2398

Pine Car Premium Kit, $17.59
Feel the rhythm, feel the rhyme. Get on up! It's Pine Car time! A classic toy that's making a comeback just in time for Maritime Hobbies' 65th anniversary. Before there were hot wheels and remote controlled cars, there were Pine Cars. This kit has everything you need to start your new hobby: A pre-cut wooden car that can be carved and detailed to your liking. The kit includes sticker decals, accent paint, and of course, front and back fenders! Carve it up, snap in the wheels, paint it up and let it fly. No batteries. No television. Just fun. And not just for kids.
Maritime Hobbies and Crafts, 1521 Grafton Street, 423-8870

Rubik's Race, $22.99
Have a friend who creams you at every board game on the market? Well, we found the new, ultimate brain-busting challenge. Take one part classic '80s head scratcher, The Rubik's Cube, mix in the spontaneous nature of Boggle, and top it off with the combative, competition of Battleship and you get Rubik's Race: The Ultimate Face to Face game. You can duke it out in this two-player race to match a nine-tile pattern. Shift, slide, and solve your way to bragging rights.
The Discovery Shop, The Discovery Centre, 1593 Barrington Street, 492-4422

Doctor Who: Time Wars Board Game, $44.99
Can't seem to find that perfect gift for the Doctor Who fan on your list that will feed (or maybe discourage) their unhealthy obsession with Matt Smith? This trivia-driven game launches two-to-six players into space on their own unique mission. With over 100 trivia questions, this game comes with everything you need to put yourself in the Doctor's shoes for a time-travelling mission. And it'll be a break from mainlining the long-running show, which might be for the best.
Strange Adventures, 5262 Sackville Street, 425-2140

SNAP Watch Junior, $14.99
Grungy plaid isn't the only thing back from the '90s. Those infamous buy 'em, trade 'em, gotta have 'em snap bracelets are back---but with a modern twist, of course. Far more than just a clever accessory, the SNAP Watch makes it all about functional style, 'cause you can't be late for the Ugly Sweater Holiday Party. This year, keep your friends punctual with this Canadian-made product. Available in 12 colours, and just 15 bucks, you can buy one for every outfit.
Uncommon Kids, 1030 South Street, 431-8543

Star Trek Scrabble, $36.99
Brush up on your Klingon and challenge your friends to a game of Star Trek Scrabble. Based specifically on the original series, Bill Shatner himself may be stumped by the Trek-twists to this edition of the classic game. With an additional 79 Trek-trendy words, including Klingon, you may be thinking, "I'm just a good speller, man! Not a Trekkie!" That's OK! This game can be enjoyed by all, so pour a Romulan ale and beam yourself to the spelling pleasure planet.
Quantum Frontier, 3087 Robie Street, 446-823

Wall Street Guru, $13.99
For the friend with an outsized sense of cultural irony. This Magic 8 Ball-esque device is from Accoutrements---the good folk who also give us bacon-flavoured lip balm and his-and-her tongue scrapers (removes tongue fur!)---and provides 20 tips for financial investments, everything from "Buy real estate," to cribbing from The Graduate: "One word: Plastics." Sometimes you just have to laugh, don't ya?
Freak Lunchbox, 1723 Barrington Street, 420-9151

Monopoly: NHL Original Six, $45.99
Na na, na na, na na, na nah nah, HEY! Tear your pal, the rainbow-bewigged hockey fan, off the sofa, away from the television, and into the latest spin on the classic board game. Representing the Golden Ages of Hockey, featuring six collectable pewter game pieces and historical trivia about the best game you can name, vie for the chance to win the top trophies, jerseys, and original arenas. Do not pass go, do not collect $200, but lace up your skates for your chance to own a piece of NHL history.
Quantum Frontier, 3087 Robie Street, 446-8233

Urban Myth, $31.99
A game to separate fact from fiction, which is tough to do these days. Urban Myth suggests a host of potential truths that could be nothing but modern folklore: Are there alligators in the New York sewers? Was Al Capone the first man to earn $100 million a year? Was Marilyn Monroe really a size 16? The truth is in here. And, incidentally, this game, along with everything else at the new location of Brain Candy---and the one in Bedford---is tax-free until December 4.
Brain Candy, The Shops of Mills, 5486 Spring Garden Road, 407-7071

Jenna Conter was forced into the wonderful world of writing after her less-than-kosher dealings with the banker were thwarted by the invention of electronic Monopoly.