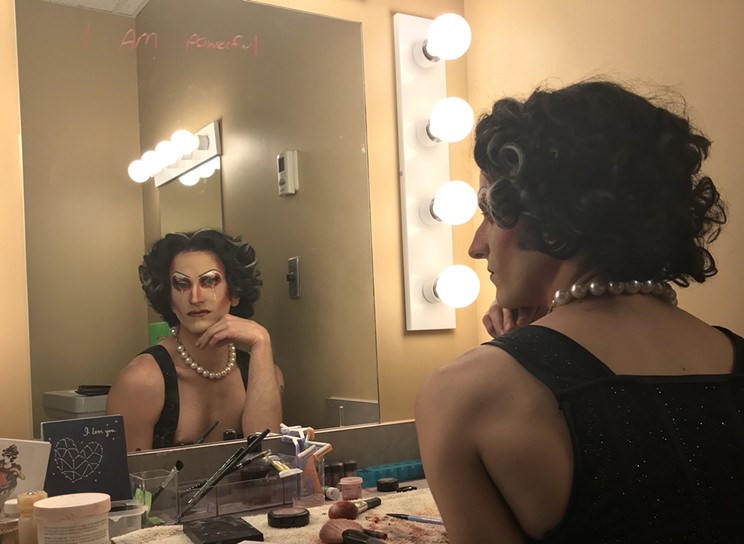 Backstage with Merritt Award-winning actor Allister MacDonald, who stars in The Rocky Horror Show at Neptune.

Neptune's star power shows us how they transform into Dr. Frank-N-Furter every night.

When I meet Allister MacDonald—after a winding trip through the bowels of Neptune Theatre, where a service elevator spits me out on a subterranean level—they’re in a grey terry cloth robe, shoulder-grazing brunette hair in a half-up, messy bun. The star of Neptune’s current production of The Rocky Horror Show both in role (MacDonald plays Dr. Frank-N-Furter) and aura, they call out “I’m heeeere” from the door of their dressing room.

It’s clear their transformation into the beloved and reviled mad scientist from space has already begun, even before I see MacDonald’s whited-out eyebrows and fresh shave.


The aesthetics of The Rocky Horror Show (closing June 26 at Neptune) are not a side consideration. A textbook example of camp and the kind of early representation that offered a lifeline to generations of queer people, Rocky Horror is a landmark of late-night cinema and part of the 2SLGBTQ+ canon. Simply put, seeing this show changed and affirmed lives.

So, of course, its visual style is inextricably entwined with the story consumption. MacDonald knows all this inherently: “I feel like, specifically, for this part, there's a lot of beauty in how ugly Frank-N-Furter is. I don't mean in their appearance, but from the inside out: There's a sincerity and a 'I give no shits about them, and live life’,” the Merritt winning actor explains, drawing pencil-thin arches.

As they sit in the glow of their light-up dressing room mirror—which has “I Am Powerful” scrawled in lipstick at the top—they take me through the process of becoming one of the most famous anti-heroes in musical history: How they mix the ugly and the beauty to make their mark on such an indomitable role.

MacDonald arrives at Neptune two and a half hours before Rocky Horror’s curtain time (for comparison, their cast mates tend to roll in under the hour-to-go mark). First, it’s shaving and gluing down their eyebrows, before applying a hefty layer of pure white pigment as a base. Next, deep blush creates an almost 3D contouring effect around the edge of the face and under the cheekbones. Slim arches shoot up over the forehead and lipstick is layered and over-lined to pop.

Their look finishes with a heavy-lidded, heart-shaped eyeshadow, with the heart's tip melting into a stream of glitter tears—a departure from the smokey-eyed film version of Frank-N-Furter that Tim Curry made famous. (It's also typically the last bit of makeup MacDonald applies.)


MacDonald volunteered to create their own makeup look for Rocky Horror, because costume and cosmetics help the actor's process. “I pictured Elizabeth Taylor meets Joan Crawford, hit by a bus,” they tell me, leaning in closer to the mirror as they layer loose pigment glitter onto their eyelids with an old liquid lipstick applicator. The palette of reds swing from blood-hued to berry, anchored by the black of MacDonald's drawn-on eyebrows and a kohl lip line inspired by Jennifer Lopez in the movie Selena.


"It's a collaboration and an homage and just my own insanity," MacDonald adds. "I learned how to do a drag face from Elle Noir, an infamous drag queen in Halifax, when I was 18 years old. She taught me everything I know—and bizarrely enough, re-taught me when we reunited, coincidentally, on the [Halifax-shot] film Stage Mother, because she was the lead makeup artist." (Stage Mother, one of two films that saw MacDonald collaborating with legendary Halifax director Thom Fitzgerald, launched the actor's profile to the point they get recognized on the street in Toronto's gay village.)


MacDonald says they showed up to audition for Rocky Horror in a simplified version of the makeup they sport nightly for the show, a move that must have, I assume, made a sizeable impression. To MacDonald, the key to looking like Frank-N-Furter “needs something not overtly pretty—I'm not trying to look like a woman."

"I'm trying to think about how Frank-N-Furter would see these old hollywood dames, and how an alien who was obsessed with these movies and these images—which is there in the script, if you really dig in—how he'd try to make himself that,” MacDonald says, giving their face one last look-over, pressing their lips together to make sure the multiple, thin layers of lipstick are adhered.

They glance at their watch. It’s almost time for costume, wig and, at long last, the curtain cue. They add some last-second black eyeliner. “Red, blood, hearts: That's where this image came from. It's about blood: About love and sex and pain and grief. And to me, the colours that do that are black and red.”