Get your tuchas to AJFF 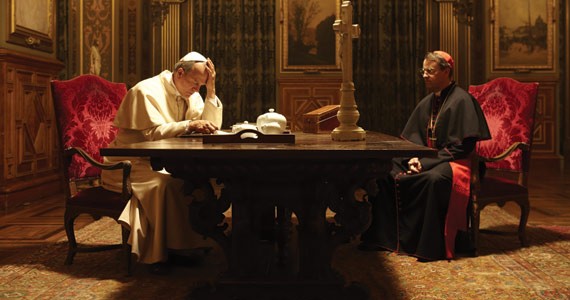 The Jewish Cardinal is part of the Atlantic Jewish Film Festival’s eclectic lineup.

Shalom movie lovers! The Atlantic Jewish Film Festival is bringing international cinema with a Jewish bent to a big screen near you.

Peggy Walt volunteers with the AJFF committee and handles promotions and publicity. Walt says the Atlantic Jewish Council noticed a lack of representation in our region's film screenings and realized if they wanted to see their stories on the silver screen they'd have to take matters into their own hands.

"There are a number of Jewish film festivals in many cities in Canada even, and we just don't have access without our own repertory cinema here," says Walt. "We have the Atlantic Film Festival and we have Carbon Arc, and they are awesome, but they just don't have the specific focus on Jewish film. So we thought, 'Well, we just have to do it ourselves.'"

One look at the program proves the diversity of genres, narratives and nationalities represented by the festival. The programming is so tight that every film begs to be seen. Walt is particularly excited about the British documentary How to Re-Establish a Vodka Empire (2012). This documentary chronicles how bumbling director Daniel Edelstyn's obsession with his grandmother's journal leads him to start a liquor business he knows nothing about.

"The director's coming and he's actually bringing this Zorokovich vodka, he's bringing some as a sample, right before the gala party," says Walt, adding, "I think people like this idea of experiencing something that's not just sitting there and watching the film."

A Saturday night schmooze-fest that offers a charming documentary, director meet-and-greet, gala event and liquor taste-test is pretty much guaranteed to please whether you're totally goyish or a real Yiddish Yid.

But the festival doesn't begin and end on Saturday. Seven films are slated to screen in the afternoons and evenings between Thursday and Sunday. Two particularly strong entries are The Jewish Cardinal (2013) on Thursday evening, the story of a Catholic Jew appointed Archbishop of Paris by Pope John Paul II, and The Zig Zag Kid (2012) on Sunday afternoon, about a troublesome boy who tries to prove himself before his Bar Mitzvah.

The festival aims to expose Halifax audiences to films they wouldn't ordinarily have the opportunity to see. "We're trying to highlight some things that are a bit unusual and interesting and I think also to sort of demystify a bit of the religion and the culture," says Walt. "If you're in a bigger city you have a lot of diversity and options in terms of entertainment from different communities but here it's more limited.

"We're trying to offer something for everyone," says Walt. "And hopefully we'll spark some discussions as well."