Get Speed at final Live Art dance this weekend

Suzanne Miller and Allan Paivio play with speed variations at the James Dunn. 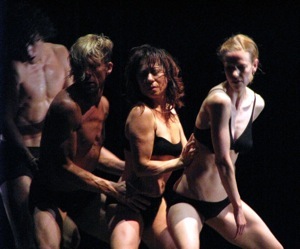 Live Art Dance Productions closes out their season with Speed (sped-up), a work by Montreal’s Suzanne Miller and Allan Paivio. For 25 years, the couple, who originally met in Halifax in the mid-1980s, has collaborated on conceptually rooted works. At the core of this project is a repeated pas de deux, or a duet where two dancers perform the steps together. In this case, Speed (sped-up) is comprised of four dancers, including a mother-son duo from the Mexican company, Contradanza.

Miller, the choreographer, was interested in “taking the sequence of movements and performing that sequence at radically different speeds.” A short clip on their website shows movements that vary from meditatively slow to quivering and quick. Miller says, “As a dancer and a musician”—-Paivio is the composer—-“tempo variations are something we were brought up with. So, what happens to a movement when its radically accelerated, it changes its meaning completely. And not only its meaning, but the technical mechanics behind the movement, all the nuances and subtleties are written into the tempo itself.”

For his musical composition, Paivio incorporated sounds associated with cars—-one of the most recognizable icons related to speed—-“ morphing them into more callings and gestures that become more metaphorical.” He references David Cronenberg’s sex-wreck film, Crash. “The car itself has this death wish in North American culture. That was one of my fascinations. It has this transformative aspect to it.”