Get ready to fall in love with The Coast’s recaps of The Bachelorette | Arts + Culture | Halifax, Nova Scotia | THE COAST

Gabrielle Drolet
In the war for the roses that is The Bachelorette, our hopes are on Halifax’s Chris G.

With Halifax hunk Chris G. among the guys wooing Michelle Young, there’s a local love interest the city can cheer for when the show starts Tuesday. 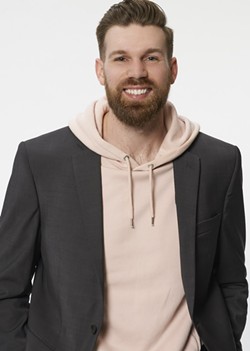 ABC/Craig Sjodin
Halilfax hunk Chris G. is a motivational speaker who loves commitment, which probably makes him either exactly right or exactly wrong for The Bachelorette.
In July, The Coast reported on one of the most exciting, significant pieces of Halifax news this year had to offer: Haligonian hunk Chris Gallant would be a contestant on the 18th season of The Bachelorette. As a serious journalist (who became a little too obsessed with the Bachelor franchise during the pandemic), I’d be remiss not to follow this story until the end. I’ll be recapping the season week-by-week, rooting for our boy and relishing in the drama.

The truth is, we’ve had a long year. (Year and a half? Two years? A long while?). Between the provincial election and the federal one, the pandemic and the, uh, everything else, we deserve a little fun. A break. A reality drama about a bunch of dudes with jobs like “pizzapreneur” and “Biotech CEO” fighting for love. This upcoming season of The Bachelorette will offer us that solace—and Halifax representation is a great excuse to tune in.

The season kicks off on Tuesday, October 19th. Before then, here’s an overview of what we can expect (a Bachelorette precap, if you will).

Halifax hunk Chris Gallant will be on The Bachelorette: With two Canucks on season 18 of the ABC show, it’s a big year for hot Canadian men.

First thing’s first: if you don’t have cable and live in Canada, you can stream The Bachelorette as it airs on CityTV at 9pm Atlantic time, even without a subscription. If you miss an episode, it’ll be available for free the next day here.

Wait, what is this show?

In case you’re new to Bachelor Nation, here’s the low-down.

The Bachelorette is a show about one woman's quest to find love. We begin with a bunch of men; every week, she gives roses to those she wants to keep; in the end, only her fiance is left standing. (That’s the idea, anyway, though the success rate is just so-so.) 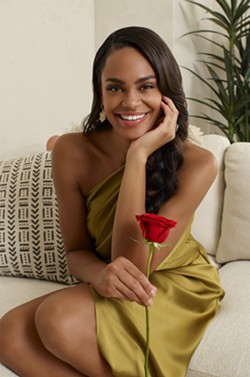 This season follows 29-year-old elementary school teacher and former competitive basketball player Michelle Young, who was the runner-up on Matt James’ season of The Bachelor. The Minnesotan was announced as the Bachelorette back in March alongside her castmate Katie Thurston, whose season wrapped this past summer. (Two Bachelorette seasons in 2021! Lucky us!)

Michelle, who was a late arrival on Matt’s season, quickly became a fan favourite. After everything she endured on The Bachelor, she deserves to find love and know peace at last.

… seems bigger than it was on Katie’s season, that’s for sure! I mean, just look at Katie’s promo versus Michelle’s.

Actually, the nicer look of this new season probably has a lot to do with the pandemic. The last season of The Bachelorette was deeply impacted by lockdown: rather than travelling to glamorous beaches or hometowns, the entire show was shot at a resort in New Mexico, with a quarantine period among entry.

As the world eases its pandemic restrictions, this season should look more like what we’re used to: based on the trailer released last week, we can expect some jetsetting and changing scenery. All we know for sure is that the season starts in Palm Springs.

ABC/Craig Sjodin
The moment Chris G. and Michelle Young meet in Tuesday’s upcoming first episode of The Bachelorette. Can you see the sparks? We see the sparks!

The contestants (and Chris G., in particular)

There’s 30 of them! They’re all generically hot dudes! If a computer randomly generated corny men it thought would attract millennial audiences, it would have come up with these guys!

Now, onto our boy: Chris G. Apparently the 28-year-old is a Ted Lasso fan who loves commitment. He’s looking for “the right soul and someone his energy bonds to.” His career is listed as “motivational speaker” (motivating what, exactly? who knows), he has two cats (aptly named “Cat” and “Small Cat”). He loves escape rooms.

He’s one of two Canadians this season—the other is Nayte, an account executive from Winnipeg who lives in Austin now. Nayte likes Edible Arrangements.

The Canadian representation on the last season of The Bachelorette was lacklustre (two hockey bros, respectively from Hamilton and Toronto). The one from Hamilton won Katie’s heart, ultimately ending up with her. Which is fine and well, but he was very boring.

Our Chris is one of two Chrises on the show, so he will be known as Chris G. The other, Chris S., is “a firm believer that chivalry isn’t dead” who “isn’t here to joke around.” OK, sure! We can only hope our Chris is the more powerful of the two.

Tayshia Adams and Kaitlyn Bristowe will be hosting again this season! They're former Bachelorettes who stepped up after Chris Harrison’s fraught departure earlier this year (ICYMI: he left after defending a contestant’s racist actions). They’re fun! Nice!

OK! See you all next week!

Gabrielle is a writer and cartoonist based in Wolfville. Her work, which focuses on health and culture, has appeared in The Walrus, The New York Times, The New Yorker, and more.
Read More about Gabrielle Drolet