Established and emerging comedians alike share the big stage to help kick off Pride with some alternative storytelling. 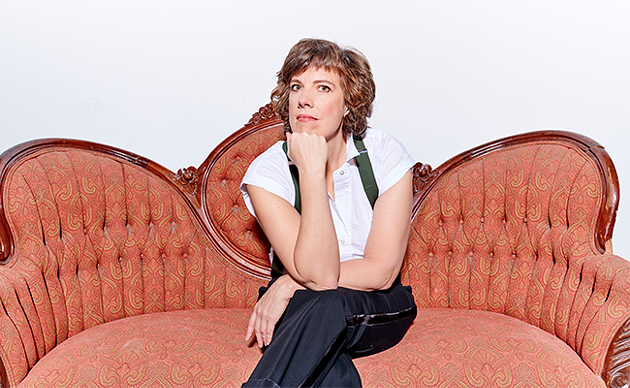 SUBMITTED
Carolyn Taylor, currently of Baroness von Sketch Show and previously of This Hour Has 22 Minutes, will try (and maybe fail) on her own terms this week.

"The cool thing about standup and solo performance pieces is you get to try stuff out and fail on your own terms, instead of having to get a whole bunch of people on board for an idea," says Carolyn Taylor. "It's good for me to explore strange corners of my brain and test things out in front of a live audience. It's the relationship with audience that can be electric, that you don't get through a television."

Taylor is best known as one-quarter of the Baroness von Sketch Show, but like her castmates and co-writers Meredith MacNeill, Aurora Browne and Jennifer Whalen, she's put in decades on the Canadian comedy scene, running the gamut of standup, sketch, theatre, film and writing for television, featuring multiple runs on This Hour Has 22 Minutes (where she met MacNeill, who's from Pictou County).

"My first stint was 2005 for a couple of weeks, I'd never written for TV before. Mark Farrell [Corner Gas] was my showrunner and he gave me a chance," says Taylor from Toronto. "I was there during the Harper years! It was ripe, you know? It was not a great time to be in Canada, but a great time to be a comedy writer. At Baroness we don't do capital-P politics, we do small-p politics. It's less dependent on the ruler of the day and more about how we govern our day-to-day lives."

Taylor will be in town Thursday as part of Pride's comedy night at the Spatz Theatre, a stacked lineup that includes her Baroness bud Mae Martin and Workin' Moms' Nelu Handa. Local representation comes from Catherine Robertson and Lisa Buchanan, who's just about a year into performing standup after participating in a workshop led by Megan McDowell.

"I'm on the board of the Queer Acts Theatre Festival," says Buchanan. "Last year's comedy night theme happened to be 'first times' so I thought, 'This seems like a kismet thing.' I'll do my first-time standup at the first-time themed show."

In the ensuing months she's started a podcast with Adam Myatt—LOL UR Gay—and appearing nearly monthly on Myatt and Lindsay Dauphinee's show at the Seahorse (the next one is July 28). "It's a friendly audience," she says. "People know it's a comedy show and that it's a queer space."

"There's a lot of folks now who are doing this longer-form—not even joke-telling but storytelling—that's different from what people are used to in a comedy club."

Taylor, too, is deviating from traditional stand-up: "One of the pieces I'll be doing in Halifax is a figure-skating routine to Whitney Houston's 'I Have Nothing.'"

Baroness von Sketch Show's third season hits CBC in September, soon followed by its American run on IFC—"I got recognized by the security guard at LAX!"—but Taylor's focus this weekend is celebrating Pride in the city. "I'm planning on sticking around the whole weekend!" she says. "It's gonna be sweaty."