Fumes is re-establishing Black ownership in the cannabis industry

Josh Creighton and Treno Morton are over a decade younger than their brother Tyler Morton, but the trio all have a few things in common: ambition, drive and determination to create something.

“We’ve been meaning to start a business for a while and we’ve been talking and ideating and discussing what could be beneficial, what do we know, what do we have expertise in?” Creighton tells The Coast on a Zoom call.

It was during one of their regular meet-ups, while "indulging" and walking across a bridge, when Tyler first seriously started pushing his younger brothers to start a business.

That was in July 2020. About a week later, Fumes Rolling Papers & Accessories became a registered business. Creighton says the company is based on a passion he and Treno share.

“We were exploring a bunch of different ventures, and it just so happens me and my brother Treno smoke a lot of cannabis, so it just seemed to fit,” Creighton says. “When it came to testing products, me and Treno were the experts on that.”

Tyler, who owns his own real estate rental company, helped bring business expertise to the project. “I’m a little seasoned, I’m 15 years their senior,” he says. And Creighton adds, “honestly a lot of the business came to fruition because of him because he’s had that experience and he’s had multiple business ventures before, so he could lend that support.” 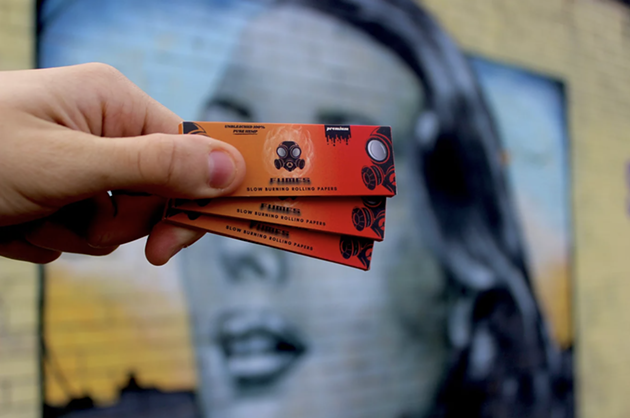 Fumes Rolling Papers & Accessories
The papers are made with unbleached hemp sourced from conflict-free growers.

Less than a year later and Fumes papers are already in over 30 stores across HRM, from East Preston to peninsular Halifax to Lower Sackville, and even a store in Truro.

The papers themselves are just $2.15, but if you fall in love with the conflict-free high-quality hemp papers you can subscribe to get monthly three-, six- or 12-packs papers in the mail, which Creighton says has been particularly popular because of the ongoing pandemic.

“There was such an opportunity but also an opportunity to take back what a lot of marginalized people have already established," says Creighton. “We’re re-establishing Black ownership within the cannabis industry. To our knowledge, we’re the only Black-owned accessory company in Canada.”

While NSLC sells legal weed by the ounce, there are still people with minor cannabis charges in prison in Canada—a disproportionate number of them people of colour. A 2018 Vice News investigation found that while Black people in Halifax represent 3.6 percent of the population, in 2015 they represented 15 percent of cannabis possession arrests, and in 2016 it was 24 percent.

But Black people are few and far between in the legal cannabis industry. An October 2020 report from the Centre on Drug Policy Evaluation found that 84 percent of cannabis industry leaders are white. And of the non-white, only seven percent are Black.

“For many years minorities, visible people of colour have always been seen through the media, through culture and through other people’s presumptions, as criminals or things like that, especially when it was illegal,” says Tyler. “Everyone was selling weed, in the media it was perceived that only Blacks or people of colour were selling weed.”

In the future Fumes hopes to create more accessory products like blunt wraps and cones, rolling trays and grinders. But the longer-term goals are even bigger. “Eventually, it would be amazing to get into growing and then to cultivate like a Black growers program,” says Creighton.

With that, it’s only a matter of time before people of colour begin reclaiming the industry.