Liberals sweep the Halifax area with Andy Fillmore, Darren Fisher and Lena Metlege Diab all winning, but 3 of the 11 NS seats are Conservative now. 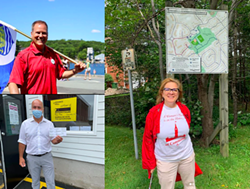 By some standards, Justin Trudeau’s decision to call an early election during the pandemic’s fourth wave was a success. Trudeau is still prime minister, and his Liberal Party gained a seat in parliament according to preliminary results the day after voting day. But the Liberals still don’t have a majority—the prize Trudeau clearly sought with his snap election call—and they lost ground to the Conservatives here in Nova Scotia. After the 2019 election saw the Liberals capturing every riding but one (West Nova went Conservative), in 2021 they lost West Nova again, as well as both South Shore-St. Margarets and Cumberland-Colchester, ending up with eight seats to the Conservatives’ three. Here are the results for the province’s 11 ridings.

Halifax
In the Halifax riding, the race was neck-and-neck between incumbent Liberal Andy Fillmore and former provincial NDP MLA Lisa Roberts. Fillmore won by about 1,200 votes. Cameron Ells ran under the Conservative banner. Former Green interim leader Jo-Ann Roberts represented her party in the downtown riding. B. Alexander Hebert represented the People's Party of Canada and Katie Campbell ran for the Communist Party.

Halifax West
With former Parliament House speaker Geoff Regan retiring after 24 years as Halifax West's MP, Lena Metlege Diab won under the Liberal banner. The former provincial immigration minister announced in June that she'd take a run at the federal seat. Metlege Diab, a lawyer, was first elected to the Nova Scotia legislature in 2013. The NDP's Jonathan Roberts had the second most votes in the Halifax West riding. He and Metlege Diab were up against Conservative Eleanor Humphries, Green Party's Richard Zurawski (a former city councillor) and Julie Scott ran for the PPC. This riding covers the west end of Halifax and Bedford, Upper Hammonds Plains, Tantallon and Terence Bay.

Dartmouth-Cole Harbour
Liberal Darren Fisher was re-elected in the Dartmouth-area riding. The former Halifax city councillor has been MP since 2015. He ran against small business owner Kevin Payne representing the NDP, who had the second-most votes. Activist Rana Zaman represented the Green party and Michelle Lindsay carried People's Party of Canada banner.

Cumberland-Colchester
The Cumberland riding is one where the Conservative Party picked up a new seat, as Liberal MP Lenore Zann lost to Conservative Stephen Ellis by a margin of 4,650 votes. Dan Osborne for the NDP was third, followed by Bill Archer with PPC then Jillian Foster for the Greens. Incumbent Zann, a former actor, was once a provincial MLA for the NDP and runner-up to Gary Burrill in the NDP's 2016 leadership race, but in 2019 she left the local party to run as a federal Liberal. This riding reaches the New Brunswick border and includes the towns of Amherst, Oxford, Truro, Pugwash and Tatamagouche.

Kings-Hants
Incumbent Liberal MP Kody Blois was re-elected, beating Mark Parent representing the Conservatives, the NDP's Stephen Schneider, the Green’s Sheila Richardson and PPC's Steven Ford. Blois secured 44 percent of the vote, compared to Parent’s 30 percent and Schneider’s 19 percent. Parent represented the Progressive Conservatives at the provincial level as MLA in Kings North between 1999 and 2009, serving as minister of environment, labour and agriculture during the Rodney MacDonald government. Blois first won the Kings Hants seat in 2019. The riding covers the eatern part of Kings County, including Enfield, Elmdsale, Kentville, Windsor and Wolfville.

Sackville-Preston Chezzetcook
Darrell Samson, the Liberal who's held the Sackville-Preston Chezzetcook seat since 2015, won again Monday night by a margin of 6,400 votes. He is the former superintendent of the Conseil scolaire acadien provincial. Prior to Samson's first election win, the riding had been an NDP stronghold under Peter Stoffer, who had represented the area from 1997 to 2015. Samson was up against Jenna Chisholm for the NDP, who was the runner-up with 27 percent of the riding’s vote, Angela Conrad with the Conservatives, Anthony Edmonds with the Greens and Earl Gosse with the PPC. This riding covers the HRM coast from Lake Charlotte to Jeddore Harbour, and includes Preston and Sackville.

South Shore-St. Margarets
Bernadette Jordan, one of Trudeau’s Liberal cabinet ministers, lost to Conservative Rick Perkins in the South Shore riding. Jordan, who was elected in 2015 and served in cabinet since 2019, is one of two Liberal ministers who lost their seats across the country (Maryam Monsef in the Ontario riding of Peterborough-Kawartha is the other). As fisheries minister, Jordan faced criticism over the past year for her handling of the Mi’kmaq moderate livelihood fisheries and the disputes between Mi'kmaq and commercial fishers. In third was the NDP’s Olivia Dorey, followed by the Green's Thomas Trappenberg. The riding covers Shelburne, Queens and Lunenburg counties.

Sydney-Victoria
Liberal Jaime Battiste, Canada's first Mi'kmaw member of parliament, was re-elected in his Cape Breton riding, with 39 percent of the vote. Battiste made headlines in 2019, the year he was elected, when offensive tweets from 2012 were uncovered. On Twitter the MP had joked about sexual assault and specifically targeted Indigenous women with references to drug use. He apologized, and Justin Trudeau kept him on as a candidate. Battiste went on to beat Conservative Eddie Orrell with 30 percent of the vote a few months after his tweets came to light. This year, he beat Orrell again in a tighter race, by a margin of 1,120 votes. Following Orrell in the polls was NDP's Jeff Ward, a Mi'kmaq candidate from the Metepenagiag Nation in New Brunswick who lives in Membertou. The Green’s Mark Embrett and PPC's Ronald Angus Barron held one percent and three percent of the vote respectively. This riding covers Cape Breton's Victoria County and the northern part of Inverness County.

Cape Breton-Canso
Liberal incumbent Mike Kelloway was re-elected in the Cape Breton-Canso riding that he’s held since 2019 by a margin of 4,200 votes. He was up against Conservative Fiona MacLeod, who secured 13,130 votes, and NDP Jenna Reddick, who received 5,400 votes. One of two Cape Breton ridings, it covers the eastern side of Guysborough county and the western, southern and eastern coasts of Cape Breton Island. This includes Inverness, Glace Bay, Canso, Port Hawkesbury and Cheticamp.

West Nova
In West Nova, Nova Scotia's sole Conservative MP when the election was called won handily. Chris d'Entremont, the former provincial politician, has held the seat since 2019 and won 50 percent of the riding’s vote. Alxys Chamberlain, retired provincial health minister Leo Glavine's former executive assistant, ran under the Liberal banner in West Nova. She secured 31 percent of the vote. Chamberlain and d'Entremont are up against Cheryl Burbidge for the NDP and Scott Spidle representing the PPC. This riding covers Berwick towards Annapolis, Digby and Yarmouth Counties.

Central Nova
Sean Fraser, the Liberal MP first elected in 2015, will be heading back to Ottawa representing the riding that covers Pictou, New Glasgow, Antigonish, Stellarton, Sherbrooke and Sheet Harbour. Fraser won by a margin of about 5,300 votes. He was up against Conservative Steve Cotter, who was second in the race with 32 percent of the vote, and NDP Betsy MacDonald who won 16 percent of the region’s vote. Also running was Katerina Nikas for the Greens, and PPC candidate Al Muir.