A sex educator who blogs about smart, safe, shame-free sex, makes every trip to Venus Envy a pleasure and is writing her first book: Kaleigh Trace is doing it right. 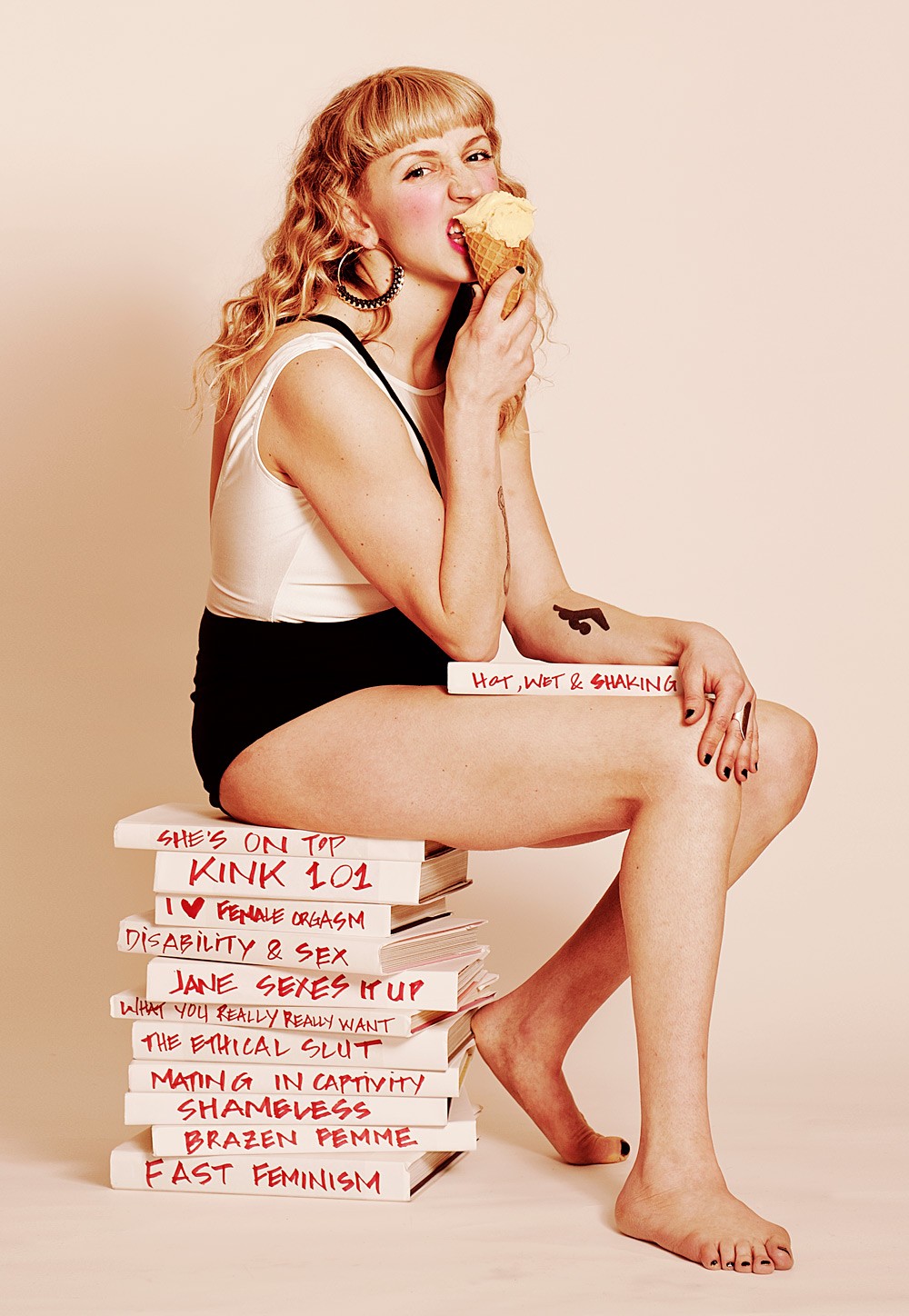 It's that time of year again. Store aisles are cramped with paper hearts and mushy sentiments, and most people are suddenly obsessed with the status of their sexual relationships. But for one incredible woman, sexual health is number-one on the priority list, all year long. The voice behind the sex-positive blog thefuckingfacts.com, the lady behind the counter at Venus Envy and half the brains behind last year's "semi-viral," enthusiastic-consent video "Ask First"—a re-write of Robin Thicke's "Blurred Lines"—Kaleigh Trace has her fingers in every pie.

"Part of why I am vulgar in my blog is because I want people to find it," she explains. The boldly informative, entertaining and refreshingly honest blog, whose top search terms include "how to fuck a woman" and "how to give a blowjob," is the lovechild of 27-year-old Trace, a (dis)abled–the brackets are intended to imply that those who identify as being (dis)abled are not lesser than those whom identify as able-bodied–queer, feminist sex educator. Covering a social and sexual smorgasbord of everything from female ejaculation to street harassment, the site, now in its second year, is both a reflection of the author's personal sexual journey and an open line of communication promoting safe, consensual, shame-free sex; a natural extension of Trace's extensive experience as educational coordinator at Halifax's favourite sex shop.

"I had been working at Venus Envy for three years already at that point and so I knew that there were a lot of questions about sex that I wanted to talk about more in depth," she explains. But the blog isn't only about sex. "Writing about sex is great and I like answering people's questions, but at the end of the day, blowjobs aren't my number-one interest. It's just what people ask about. I really like talking about things that we all experience that are shitty. And sex is one of those things that we all experience that can be really shitty, but street harassment is also a thing that's like that and I liked writing that blog post."

The blog was initially borne out of a deeply personal event for Trace: her experience having an abortion in 2011, a subject she only just wrote about a few weeks ago, in a post called "So You're Having An Abortion (in Halifax, Nova Scotia)."

"I'm glad I waited two years to write [the post] because initially I was super emotional," she explains. "I'm pretty recovered, which has allowed me to write about it in a much more informational way rather than emotional."

And it was exactly this type of personal recollection that Trace found missing just a few years ago.

The "lack of the information that I was given felt really remarkable," she says. "I got pregnant and then I knew what I was going to do, and the sexual health centre does give you some pamphlets but it just felt like this weird mystery that no one was talking about.... I didn't really feel like I should talk about it, which was also a really weird feeling for me because I kind of talk about everything."

While Trace was lucky to have a supportive group of women around her who had shared similar experiences, she felt compelled to write about the subject that no one was talking about. "I just was like, fuck, what if I didn't know these women? What if I was a teenager and I didn't have these women who could come over and whisper these things to me? So that's why I started the blog, and it took me two years to actually write about the abortion."

But the experience, while she kept it off the blog, was behind every post she wrote.

The abortion has "always been there. And right before I posted it I definitely had a little anxiety attack and called [my friend] and was like, will you just read this," she says. "And she was like, 'You actually have to post this. It's super important. You have to do it.' But it was really scary."

But, because she is braver than most and values honesty and education over self-preservation, Trace posted her story. "I haven't gotten a single piece of hate mail, which I'm really happy about," she says. "I wouldn't have been shocked." In fact, she's received nothing but positive feedback, and her inbox has been crammed with emails from women compelled to share their own experiences.

It is in this spirit of fearless generousity that Trace can best be described as an enemy of silence–the victimizing, damaging kind of silence; the kind that hurts rather than heals. And after posting on the subject she'd been silent on for so long, she was reminded of the why she first began writing a journal in 1995, after a car accident left her (dis)abled.

Pair this honest-to-a-fault nature with a hyper-awareness of the cracks in the system that lead to fault lines of oppression, and you'll understand what makes Trace so great at educating others through her various roles at Venus Envy, whether it's teaching a consent workshop or helping nervous customers navigate the potentially overwhelming wall of sex toys.

"I think that the job ended up really suiting me in a way that I didn't expect, because I'm (dis)abled and so because for my whole life people have been like, 'Can I ask you what's wrong with you?' I've been navigating awkward questions since the accident, and Venus Envy is actually just about navigating people's discomfort—which I love doing. When people ask me what's wrong with me I'm not angry, I want to help them figure out what they need to know."

It was with this perspective of responding positively to the curiousity of others that Trace began to merge her ideas about being (dis)abled with fielding questions about sex. She wrote a workshop called Every Body is Doing It, about how to adapt sex toys, and then turned it into a zine, which you can pick up at the shop.

"There are so few resources for people with (dis)abilities and sexual health education in this province," she explains. The zine goes through everything from anatomy to variations on sensation, erectile dysfunction and other potential sexual limitations and lists sex toys and accessories that can help.

"If I'm an expert in anything it's probably sex toys," Trace admits proudly. "It's what happens if you work at a sex shop for five years."

And while Trace may be a self-proclaimed expert, she appreciates sex toys as intricately connected with the individual body and its unique challenges, coming from a background where she's had to learn to adapt, not conform.

"I think sex toys are super revolutionary...not because everybody should be using them—and that's not what I'm saying—but just because they can really make the way that you experience your body different.... Especially if your experience of your body is through limited mobility and sensation or other expressions that (dis)ability can take. It's pivotal and powerful."

It should be obvious by now, but for Trace the whole point of sex education is accessibility. So in response to the lack of plain-language sex books out there, she's writing a memoir: Hot, Wet and Shaking which will be released by Invisible Publishing this summer. Inspired by Trace's blog, the book will feature all new material and will focus on her experience becoming a sex educator.

"I've been keeping a journal since the car accident. Since 1995. I've been journaling since then, like any teen girl does, but I just never quit," she says. "The book is a journal the whole world can read if they want to."

"Being (dis)abled is the primary thing that I like to make sure is made clear," she says, after an interview that felt like a coffee date with a good friend. "It always feels important, especially when I'm doing sex ed, because people are always like, 'Oh (dis)abled people aren't sexy.' I'm a sex expert, and I'm (dis)abled. It feels kind of important."