From cheap to craft: A Halifax beer guide

Getting to know this city via its extensive selection of beer, from Schooner to saison.

Walking into a liquor store can be overwhelming—especially if the selection is not what you’re used to. But this city has lots of local options to wet your whistle. Instead of running to the Stella and the Rickard’s, here’s a taster of Halifax-made beer that covers the inexpensive as well as the bougie.

Schooner Lager by Oland Brewery (5% ABV)
Around here, Oland is ’ faithful. It’s Vitamin O. Beer snobs may turn up their noses, but this brewery goes way back. It started in when it was called the Brewery. These days, Oland is a beer tycoon owned by Labatt. It’s hard to go anywhere that serves alcohol without seeing the red and white can of its Export Ale or the historic Bluenose sailing across the label of the Schooner Lager. Both are cheap and easily accessible. We’re recommending the lager in particular because it’s literally the reason the Bluenose II was built (look it up), which is the most Maritime thing imaginable.

London-Style Porter by Propeller Brewing Co. (5% ABV)
Propeller has been making craft beer before craft beer was a thing in Halifax. Its London-style porter proves beer need not be clear to be refreshing. It’s too heavy to be an appealing patio beverage, but it’s one of the best beers you can drink when the sidewalks start getting too icy to leave the apartment. Just don’t drink and walk.

Espinazo Del Diablo by Good Robot Brewing Co. (4.7% ABV)
It’s hard to describe this beer without making it sound gross. But it isn’t gross. It’s really good. If you haven’t already learned about Good Robot via its public gaffes, perhaps you’ll learn about it through its beer. El Espinazo Del Diablo, a Mexican lager which takes its title from a Guillermo Del Toro film, is more interesting than that time Good Robot got barred from distributing promotional condoms (long story). This beer has jalapeno in it and it somehow works. Don’t be afraid, just try it.

Blueberry Ale by Gahan House (4.5% ABV)
This is where it starts getting adventurous, so stick with us. True, Gahan started in Charlottetown, but the Halifax waterfront has been home to one of its restaurant-brewery hybrids since 2014. Nova Scotia makes a big deal out of its blueberries but our local breweries haven’t made a lot of use out of them in any of their staple beers (hint, hint), so one must turn to beer from other parts of the Maritimes. That said, this one is widely available around Halifax.

Sport (Blend 2) by Stillwell Brewing Co. (5.6% ABV)
Early last year, the team behind the popular Stillwell Beer Bar (not to mention the Spring Garden Road beer garden) announced it was going to start making beer in addition to pouring it. Stillwell Brewing Co.’s beers are generally -style, bottle-conditioned treats that require patience: It takes for the brewers to make it, so consumers have to wait. The time-consuming nature of the brewing process makes it pricier than others and it’s also harder to find, almost exclusively available at Stillwell’s bars or its weekend bottle-release events. But if you can get your hands on some it’s well worth it. Stillwell recently brewed Sport—a refreshing beer made with sea salt and lime zest—for the second time and it’s one of the company’s best creations.

Killick Session Lager by Spindrift Brewing Co. (4.7% ABV)
Want to get into some of the newer local craft beer but don’t know where to start? We got you. Killick Session is the way to go. It’s a step above the usual suspects but it’s not intimidating and will save you from getting lost in a sea of dry-hopped, barrel-aged double IPAs with matcha notes and rainbow sprinkles. This no-frills lager is popular for a reason: It’s easy-drinking and a six-pack won’t put a big dent in your grocery budget. 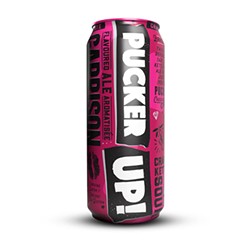 Pucker Up! By Garrison Brewing Co. (4.9% ABV)
Everyone has that friend who says they “don’t like beer.” In fact, maybe you are that friend. Some advice: Put every idea you have about what beer tastes like aside and try Pucker Up! kettle sour. It’s sweet, fruity and—obviously—sour. It was previously only available on tap, but its popularity earned it a spot among
Garrison’s core roster of beers.

Original Craft Cider by Bulwark (5.8% ABV)
Meet cider—beer’s gluten-free cousin, if you’re worried about that sort of thing. The beauty of Bulwark is it’s commonly available, whether you’re at the NSLC, a restaurant or bar. This cider is born in Nova Scotia, but since there are no orchards in the city it’s made in the Annapolis Valley from five varieties of apple. But it doesn’t count as a smoothie or anything, so we wouldn’t recommend having one pre-exam. The point is, it’s tasty and a crowd-pleaser.