From a fellow warrior | Health | Halifax, Nova Scotia | THE COAST

From a fellow warrior

Jodi Myles reflects on her son's struggle more than a year after he died by suicide. 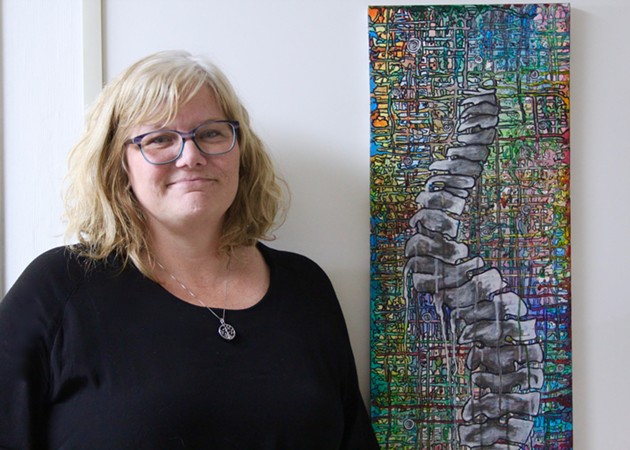 King's College Investigative Workshop
Jodi Myles, pictured here with a piece of Jordon's artwork.
A small painting hangs on the wall of the Antigonish Public Library. Its edges are a mix of grey, black and white, which become a brilliant array of colourful brushstrokes. At the centre of the canvas is a grey door.

“‘Nothing can keep you from shining.’ A collaboration between Jordon Myles and Taryn ” reads a small pink card below the painting.

Jordon Myles was a talented artist–many of his pieces adorn the walls of the library’s common space in the sleepy downtown. But Jordon never got to finish that painting.

In February 2016, Jordon Myles killed himself.

Taryn, his former girlfriend, painted a door in the empty square rectangle in the middle of the canvas after Jordon’s death.

Jordon had lived with mental illness his entire life. His artwork was a refuge and a channel for his suffering, but ultimately it was not enough.

Since the age of eight, Jordon had self-harmed. By the start of high school, he was enrolled in therapy sessions and taking antidepressants.

Jordon received mental health care almost immediately after he was depressed. But even after accessing the care, he constantly received different diagnoses and prescriptions.

The combination of pills that Jordon was prescribed was making things worse, not better, for the young artist. Jodi suspected Jordon had bipolar disorder, although that was never diagnosed.

She also believes that earlier intervention in his mental illness might have saved his life.

“I think he was treated by a lot of overwhelmed people,” said Jodi.

Jordan was self-medicating with marijuana, and Jodi said that seemed to become the focus of caregivers.

“I have a little bit of anger in the fact that I think he was seen as a delinquent at times rather than a mentally ill person,” she said. She added that he was never offered addictions counselling.

“Each time he stayed, his hope decreased,” said Jodi.

From the first he was admitted at the age of 16, he was always placed the adult ward.

The only people who would see him were the nurses, the psychiatrist doing rounds and the family doctor, who would come by from to time. No other programs were offered, Jodi said.

She described the mental health unit as a holding unit to keep you safe, though she said the nurses often gave compassionate care.

For her son, the isolation of the inpatient unit was a stark departure from the creativity, fashion and love that filled his life.

After repeated stays in the hospital, Jordon was barely .

In late 2015, Jodi met Jordon in the emergency department at St. Martha’s. “That boy I’ve described to you… beautiful and takes care of himself… he wouldn’t look up at me.”

“He was wearing dirty pants, and a dirty shirt with a very fancy coat, no socks, no underwear. His hair was greasy. It was very sad to see.”

That night, Jordon was deemed an uncooperative patient after getting “mouthy” with hospital staff. He was placed in an isolation room, with concrete walls and a mattress on the floor.

Jodi knew that freshening up would help Jordon, so she brought him a bag of clothes, food and a book. In a concrete room, in the midst of a terrible moment in his life, the bag brought a smile to Jordon’s face.

That was Jordon’s last stay in the mental health unit at St. Martha’s. But in the months after Jordon’s death, Jodi Myles kept thinking about how such a simple gesture helped her son.

Jodi helped the Mental Health Awareness Walk in September 2016, which raised over $3,000.

The semicolon in the name is not a typo. It is an important symbol for mental health awareness–a metaphor that the sentence is not yet over, and a reminder of the importance of persevering.

With the money from the walk, Jodi Myles bought dozens of canvas bags and filled each bag with a blanket, socks, toiletries, colouring pages, markers, a book and a handwritten letter.

Each letter was signed “from a fellow warrior.”

A foundation was also set up in his name, which has received many donations of gifts for the bags, as well as more than $5,000 in cash. One of the uses for that money: Helping people without means pay for expensive private therapy.