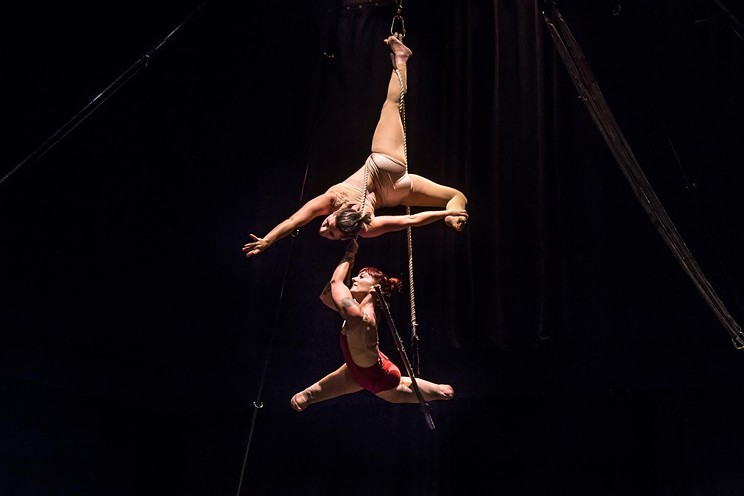 The biggest trick circus performers learn isn’t how to fold themselves in half or walk on stilts or scale two stories on a bolt of vertical, cascading fabric. It isn’t how to swing from a great height or do the splits, though LEGacy Circus’s Halifax Fringe Show features all these things.


Nope, the biggest trick circus performers learn is how to do all this effortlessly while making the *audience* break out in a sweat.


This is exactly how it felt on Sunday afternoon, at LEGacy Interrupted’s opening show, watching Erin Ball and Vanessa Furlong move along a trapeze in tandem. It's an accessibility and inclusivity-minded circus performance, complete with ASL interpretation and voiceover narration. The duo—who have been performing together since 2016—move in a hers-and-hers asymmetric mirroring, folding over the bar and each other as they contort.

A two-story-tall structure that looks almost like the skeleton of a tent houses them and the trapeze. While they never shake, the structure does, an off-beat jitterbug at the fluctuating weight it bears as they move. Almost every audience member in the Neptune Scotiabank Theatre is leaning ahead, breath tense. What if they fall?


They don’t. Instead, they present a three-act show with a loose narrative structure of separation over the pandemic—and the reunion Fringe has allowed them. Both Ball and Furlong (who both identify as people living with a disability, with Ball being a double below-knee amputee) do solo acts following the opening tandem work. At one point, Ball climbs onto the trapeze by using her prosthetic leg as a reaching stick, since Furlong’s hand isn’t there to grab; Earlier in the show, Furlong holds a guitar case aloft on her lap in place of her collaborator and friend.


By the time the show-closing section has the pair performing together with a vintage-y wheelchair as a prop, two pairs of stilts moving like spider legs, you’ll never want them to be separated again, pandemic be damned. You might even ask, as one audience member in a wheelchair did during the post-show Q&A: “How did you get to be so comfortable in your own body? Because I’d love to feel like that.” Tears flowed. Everyone clapped. “It’s taken a lot of work and time,” Ball replied.

How to binge on Fringe