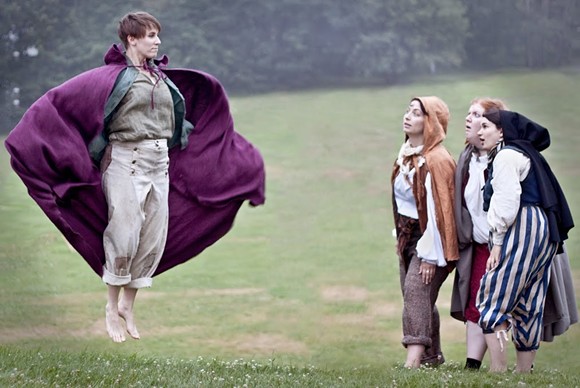 Ashley Marie Pike
"In the Telling" - A family-friendly adventure tale

Audiences are building as the buzz gets louder about the 2014 Fringe. So much good comedy at this year's festival, but also an impressive range of drama from heart-touching to mind-bending. Something for everyone!

I'm telling you, run, don't mosey, to get your tickets for this show. It's a wild-west tale about Kat MacReady, a gunslinger who must hunt down the devil to avenge her father's death. The choreography is jaw-droppingly brilliant. The writing is extremely sharp. The acting is A-1. Film buffs will be delighted by the cinematic references that abound. Toronto's Sex T-Rex Collective has created a show so funny and clever that it is truly a Fringe must-see.

Toronto-based playwrights/performers Mani Eustis and Molly Reisman have created a cute, high-energy musical about the trials and tribulations of being twenty-two. Crushing student debt and and uncertain job prospects lead the central characters to enter a play-writing contest to become the "Voice of Canada". The music is catchy, the performances are engaging and there are quite a few laughs.

The premise for The Curator is to build an improv show around a theme that is chosen and presented by a different curator each night. At the outset of the show, the actors are given a set of props (beautifully displayed) and a "lecture" on the theme. The show I attended was built around the theme of  "Van Gogh".  Ears, sunflowers and brothels featured large in the improv scenes that followed. It showcased a four-person cast of talented improvisers and there were some moments that really worked. However, I missed the variety and energy that usually comes from changing-up the games within an improv performance.

Vile Passeist Theatre brings something a little different to the Fringe. In the Telling is a family-friendly retelling of a 400-year-old comedy which is structured as a tale-within-a-tale. The production combines a charming story with fine acting and ensemble singing, beautifully-detailed costumes and lovely original music.

Kathi Langston gives a riveting performance as an aging actor facing the descent into the depths of dementia. Her face is a canvas that displays the most subtle shifts of emotion, from the utter elation that happy memories bring, to the clouds of confusion and doubt that scuttle across her mind. Her physicality shows Mabel's state of mind in the bend of her spine or the skip in her step. The subject matter of the play is somber, but there are lovely moments of lightness and humour. An amazing performance in a play that beautifully explores a difficult subject.

Absurd. Lovely. Hilarious. Waiting for Batteries manages to embody these three words in an unconventional piece of theatre that takes Beckett's Godot as its starting point. The central relationship between caregiver Eduardo and group-home resident Silvio is touching and funny. The home's Activity Director and his helper further bring the audience into the play in a meaningful way. Surprisingly affecting and very funny.

Bud Hunter used to be a fixture at the Atlantic Fringe, and it's an understatement to say I was not a fan of his unpolished one-man shows. But several years have passed since his last foray onto the stage here, and I was pleasantly surprised to find I enjoyed his rantings much more than in the past. I even found myself nodding my head at some of his "Demandments" for changing the world- why not have a Big Brother-esque reality show to close the books on the Canadian Senate?