How the goal of spending a summer pulling a rickshaw helped push Frietzen Kenter to get strong as hell. 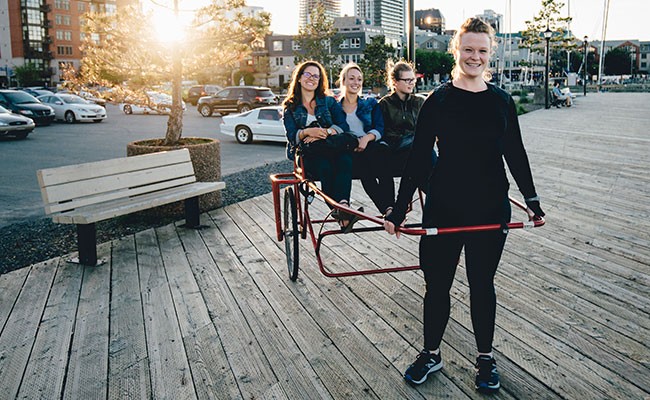 She isn't drinking, but Frietzen Kenter spends more time around the Halifax bar scene than most. Since the start of May, she's been devoting her Thursday, Friday and Saturday nights running up and down downtown Halifax's hills, rickshaw in tow.

Kenter is Halifax's only female rickshaw runner this season, a job that inspired her to reach a new level of fitness.

When she first saw the Kijiji ad for Last of the Old Kind rickshaw runners three summers ago, Kenter applied for what she thought would be the perfect summer job: Running around the city, getting paid to meet tourists and locals.

"I wanted to do it so bad, and I've never seen a female do it, but I wasn't at the fitness level," she says.

This summer, she finally was.

"I started being serious about fitness about a year ago, and I started actually lifting at the gym, doing bodyweight stuff like push-ups and squats."

Kenter thinks the company probably wouldn't have hired her if she hadn't already started working out.

"Or I'd be having a lot harder of a time," she says, laughing. "Even if you're the fittest person and you got into this job, it'd still take two weeks for your legs to not hurt."

One of the perks of the job for Kenter is the ability to pick her own hours, since the rickshaw is only a side gig for her acting jobs.

"You can't do it full-time, you can't run 40 hours a week, you just can't," she says. "But I want to see how many hours I can put in, because right now I'm at max 12 hours a week. I don't know if the guys will be able to go longer than me—we'll see—but I'm intrigued to see where my fitness will go."

Usually, the shifts are three or four hours long. In warmer weather, Kenter expects to work more during the daytime—especially around the waterfront during cruise ship season—but for now her nights start at Fenwick Tower, where the carts are stored in the basement parkade, around 11pm.

Kenter spends the "early" part of the evening on Spring Garden Road before moving down toward the bar district.

"Argyle Street is like the place to be, around Pizza Corner," says Kenter.

But because it's still early in the summer and nights are cold, people usually cab to their destination.

Although she says she feels pretty safe downtown, and has befriended a few bouncers, Kenter has still gotten some bad vibes.

"There was a guy I got during the day," she recalls, "I think he was a local, and I'm pretty sure he was filming my butt with his phone."

Kenter is bothered more by some comments she hears from passerby. Things like, "You'd better tip her good!" or "They're only in your rickshaw to look at your butt."

She says people think they're doing her a favour, but it's the opposite.

"It's my choice to take men in my rickshaw, but they're making it seem like the men are making me do it," she says. "I'm there as my job, I need to make money and eat. If you actually want to support me as a paid human being, don't call out that I'm a female runner pulling guys."

But there are also positive comments, especially ones from other women.

"They're like 'You go girl, that's awesome!'" Kenter says. "They're not necessarily going to become rickshaw runners, but they're really happy to see a woman doing it. That's really nice, it feels so good."

Unwanted commentary aside, she says the best part of the job by far is meeting people.

"It's the connection with people and I'm allowed to do that in this job without being weird, because I can just talk to anyone," says Kenter. "I love it. When I'm done for the night, walking back to Fenwick Street with my rickshaw, I'm actually saying in my head 'I love my job.'"

The connections are countless: There was the retired fisherman here on a cruise who she took to the Maritime Museum of the Atlantic, and the Dutchman here on business who Kenter toured Peggys Cove with. She even once coached a man on his squats in the middle of the night after dropping him at home.

Kenter knows she probably won't make a huge profit from rickshawing, but it's worth it as long as she can pay rent for her cart and keep making connections.