Fine. Owen Wilson turkey is smarter than other turkeys because his voiceover says so. He gets pardoned by the President and somehow lives at Camp David ordering pizza. After being kidnapped by Woody Harrelson's turkey freedom fighter (terrorist?), the two break into a top secret military bunker and steal a time machine. Now 400 years in the past, and 20 minutes into the film, Woody and Owen befriend a lovingly racist band of wild turkeys (including Amy Poehler as The Girl Turkey) and try to Terminator the first Thanksgiving to prevent the future turkey judgement day that is to come. Wilson could not be more checked out here, while Poehler tries her damnedest. Directed by the guy who made Jonah Hex, and co-written/produced by Kevin Smith lackey Scott Mosier, the film's overstuffed (sorry) premise and comatose humour accomplishes absolutely nothing. A monumental waste, Free Birds flails around for an hour-a-half, gobbling loudly.

Free Birds is not showing in any theaters in the area. 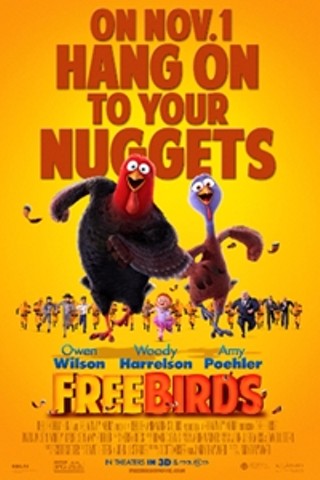