Francella Fiallos wants to help you find your voice

The programming director for CKDU, Halifax‘s only campus-community FM radio station, is passionate about getting more diverse hosts telling their stories on the airwaves.

IAN SELIG
Come to CKDU "to learn, to experiment, to make mistakes, to fail, but to always try again," says Fiallos.

Through the front doors of the Dalhousie Student Union Building, up the elevator to the fourth floor, past the crowded cork boards and penny-candy machines, time slows down. Here, inside the CKDU studios, a minute is measured by the patient revolutions of a 12-inch vinyl record. At the moment, it’s Aretha Franklin’s Amazing Grace.

Francella Fiallos, the 25-year-old programming and development director at CKDU 88.1 FM, wants to pay tribute to the woman whose powerful voice became an anthem of the feminist movement. The day after Franklin’s death, Fiallos is playing an original copy of the record on air.

“We have actual people operating” the station, she says, “so we can play her music on vinyl. Not every radio station can do that.”

Of course, CKDU is far from every radio station. Over the last 30 years, the campus station has broadcast a symphony of eclectic music and voices as part of its mandate to be an alternative broadcaster. It’s not unusual for the station to host a variety of shows with few limitations.

It’s also not unusual for most of those shows to be run and hosted by men.

“There are some days when I’m the only woman who steps foot or the only person of colour here,” says Fiallos. “Historically, this has been a place for straight white dudes to hang out.”

It’s something she’s trying to change. Since she took on her role in 2016, Fiallos has made it a mission to reshape the culture of local radio. With the station’s support, she’s helping to make room for shows by women, queer folks and people of colour on the airwaves.

“People can play whatever they want. If they’re like, ‘I want to do a three-part series on jazz in Nova Scotia,’ I would work with them to develop how that would sound, what they would need to do, where they could research, et cetera,” she says.

With the right support, Fiallos hopes more diverse programming will come to CKDU. It’s why, for the past few months, she’s been offering special training to help diverse new hosts operate radio shows of their choosing.

“I was thinking, ‘What can we do to get people through the door here?’ Having and holding a space dedicated for people in those communities would make sense.”

But it doesn’t always lead to new programming.

“You have to be in it for the long run,” says Fiallos. “Equity initiatives are not really things that happen overnight. It takes a long time for it to work the way you envision it working. People who are creative and artistically minded are involved in so many other things—school, work, practice—and for women, they have people to take care of. Saying, ‘Why don’t you come in once a week for an hour or 90 minutes to do a radio show you don’t get paid for,’ it’s a tough thing to sell.” 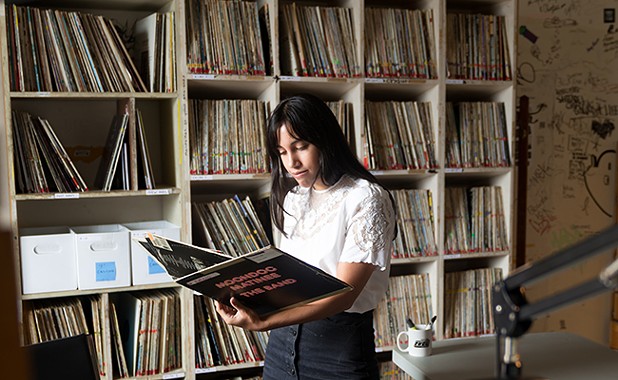 IAN SELIG
Looking through CKDU's extensive record collection.
This isn’t the world she imagined herself in a few years ago. Fiallos is a trained journalist who studied at Carleton University and wrote her Masters thesis at King’s College—two of the best journalism schools in the country. While at Carleton, an instructor told her she had a knack for radio. When she moved to Halifax she applied for a job at CKDU.

“For a long time I had a dream of just working and making radio at CBC,” she says. “As I get older and I’m trying to figure out what I like, what inspires me and what challenges me—it’s not really CBC.”

Her passion is music and broadcasting, but Fiallos is critical of the journalism industry.

“In journalism, we talk about getting many voices and perspectives, but there’s a person behind that voice,” she says. “A story. A life. That life has triumph and struggle, trauma, success. To just say, ‘We need this voice,’ trivializes all that. I’ve been thinking about that and how I can respect that in my audio  projects.”

How does she do it? “I just tell people that. I tell them, ‘I want your story to still feel like it’s yours, and not something I just took from you for my project.’ They appreciate that level of honesty because there’s no trust otherwise.”

“Equity initiatives are not really things that happen overnight. It takes a long time for it to work the way you envision it working.”

Trust is a big part of her own recent audio project, Walking Gottingen—an immersive audio walk of the historic north end corridor. Instead of hearing impersonal facts about a building, listeners will be able to hear stories from the people who’ve called that place home.

“There’s more intimate storytelling involved,” she says. Fiallos co-created the project with Jayde Tynes, a Black Indigenous reporter for CBC. They hope to launch sometime in the next two months.

The collaboration is a luxury Fiallos enjoys because of the nature of her work at CKDU. The station’s mandate allows for a lot of barriers to be broken, she says, while mentioning the important work done by programs like Black Power Hour. The weekly music and discussion show, co-hosted by writer and activist El Jones, is an empowering outlet for people of colour, especially those in the nearby Burnside prison who regularly call in to talk over the airwaves.

“It can’t be done anywhere else,” says  Fiallos.

She hosts a show herself, called Superconnected, playing her favourite music. It’s the best thing she does for herself all week. “I consider it self-care,” she says. “You can come in, pick you love, and play it for an hour.”

She also relishes the opportunity to fill in for “surprise slots,” like the Aretha tribute she’s just put on.

The record needle scratches, filling cold studio speakers with the original, permanent sound of a Baptist church in January 1972. The speakers shiver like an old dog shaking off .

In the same Aretha Franklin’s voice was nourished at church, people can find their voice in community radio. There’s no “barrier to entry,” says Fiallos. It’s what makes it the perfect place for emerging voices.

“A lot of people think if you do an audio project it immediately has to be a podcast," she says, "but if there were more opportunities to think outside that realm, it would be really cool.”

Fiallos says CKDU is the place to start.

“It’s just a great place to learn, to experiment, to make mistakes, to fail, but to always try again," she says. "Commercial and public stations? They don’t give you a second chance. Here, it’s just, ‘Try again next week.’”