Tips on how to shuck your oyster like a pro, from Guinness World Record holder, Patrick McMurray.

1. The first step is the easiest one, but maybe the most important. "Keep your eyes on the oyster," McMurray says. You need to pay attention to what you're doing. "And use an oyster knife; don't try a steak knife or a butter knife or anything like that. They don't have to be as fancy as my own." Swissmar, a kitchen-tool distributor and manufacturer, has an oyster-shucking system designed by McMurray called the Shucker Paddy line, which includes a uniquely designed knife. "They can be very simple, but if it's designated an oyster knife the blade is very stiff and will allow you to open up oysters better."

2. The best way of opening oysters is to use a hinge technique. "Using a board or a cloth to hold and support your oyster, cup side down, you use your knife to open it from the hinge," McMurray says. "The hinge is at the back—most oysters look like a little teardrop shape, so where the apex is, where the teardrop meets and the point is, is the best place to open up the oyster. Your knife tip can fit right into the hinge and you give your knife a little wiggle until it sets in there, and then you quarter turn and it should pop right open."

3. You don't need a ton of force to open an oyster—you need around 40 pounds per square inch, McMurray says. "It's just more of a technique," says McMurray. "And once it's open then you can raise up the shell and scrape the adductor meat off and you look for any grit and then you cut underneath the muscle at the bottom and you're ready to go."

4. Separating the adductor meat is an important part of getting a well-shucked oyster. You want to make sure you don't tear up the meat, and you also want to make sure you don't spill the liquor. Before you get in there with the knife, clean out any grit or sand. "As a right-handed shucker you want to get that adductor muscle closer, so you should turn the oyster 180 degrees in your hand—so if I'm opening with the hinge pointing towards my right hand, I now want to have the hinge pointing towards my left hand—you can get to the muscle easier and without cutting the meat," says McMurray. "Then you just want to do a scrape and a push. Just push the meat off of the bottom shell."

If you do mess up a bit, don't worry too much. "If you cut it and it doesn't look really good, you can flip it and your oyster will look perfect," he says. "Only I'll know that it's backwards and upside down in the shell." 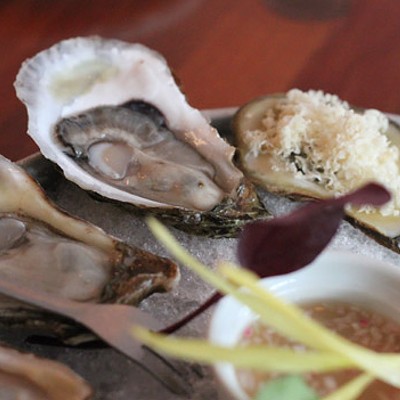 Your guide to Oyster Fest