The Supreme Court of Canada’s recent decision has changed the rules of the game to favour the visiting team.

ADOBE STOCK
There's a Canadian flag on the play.

As problematic as football is, with the Washington R*****ns and the Kansas City Chiefs, the game holds a special place in my heart. For those of you who don’t know, my father is a residential school survivor and without getting into the nitty-gritty traumas of his experiences, it left him with a deficit when it comes to parenting skills. Football was the first way we ever connected. 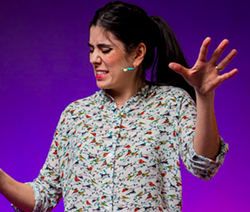 HANNAH GRACE
Rebecca Thomas is a Mi’kmaq activist and Halifax’s former poet laureate.
I’d sit on his knee or on the couch beside him and he’d explain to me what , how to spot pass interference, what a challenge was. In football, if the coach of a team doesn’t agree with the play called, they can challenge it and have the ruling overturned. I understand, for the sake of brevity, that each team cannot be consulted with every play before a ruling is made. The challenge flag is meant to be used only when a bad call is obvious. But if the coach challenges and the ruling is not overturned, the team loses one of their three timeouts.

In spite of this loss, the quarterback still gets paid his millions of dollars. The coach lives on to coach another game. It would appear that Canada has the same after-the-fact strategy when it comes to rulings for Indigenous people.

On October 11, 2018, the Supreme Court of Canada ruled that lawmakers would not have to consult Indigenous peoples on laws that would directly impact Treaty Rights because it would be too onerous a task. In the court’s opinion, it could slow legislation down to a crawl.

The duty to consult ensures section 35 of the constitution and judicial precedent—set by decades of legislation by the SCC itself—is followed. This ruling essentially says that the Crown is not the Crown in parliament. Or rather, the rules of the game don’t apply if the visiting team is favoured to win.

We will have to divide up our already meagre slice of funding to cover the court costs of lengthy legal battles. We will have to fight for our rights after-the-fact while damage is concurrently being done by these new laws. However, if we lose the challenge, we lose all the money that goes into those challenges. We lose far more than a timeout and our players don’t get to move on without penalty or consequence because that money came out of an already strapped bank account.

Here’s the thing. It’s really hard to play a game you’ve for your whole life when the rules are suddenly changed. But it’s not a game for Indigenous people; it’s our lives and we don’t get to use any remaining timeouts to pause the damage being done so we can consult our playbook.