How one couple’s preservative and additive-free sauces and rubs are heating up the Brewery market. 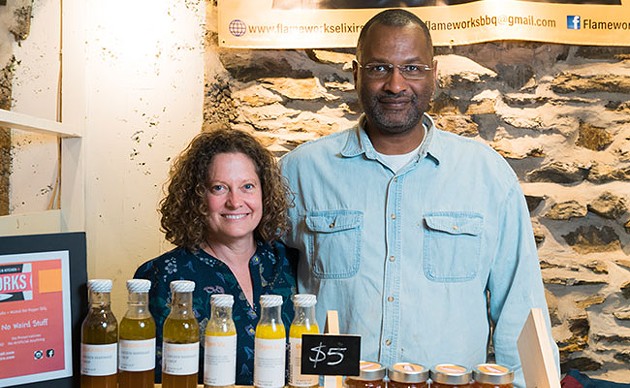 That's the slogan printed on each jar of Flameworks Elixirs' sauces, rubs, marinades and jellies.

Last winter—five years from the day they first met—Ken Jones and Sue Belford decided to create a line of gluten-free condiments without preservatives or additives. Their products include a Zanzibar-inspired fish rub, maple mustard sauce, wild blueberry and chile sauce and hot pepper jelly sweetened with apricots.

"We like to eat whole foods," says Belford. "And there was nothing on the market like this."

Jones grew up in Pennsylvania and learned how to bake when he was at boarding school. "I worked with the school's baker. I'd get up at 4am, go to the bakery, and make doughnuts, homemade bread and biscuits." Meanwhile, Belford started cooking as a way to de-stress after a long day as a consultant in the oil industry. "Cooking was my decompression time," she says.

As they chat with customers, Belford and Jones swap stories of meals they've made for family friends. Wild boar shoulder. Brined and smoked turkey. They finish each other's sentences and high-five often. They still talk about the meal Belford made for their first date: Lamb popsicles marinated, barbecued and served with a turmeric and garlic sauce.

"It was just to die for," says Jones.

"We're open to anything," says Belford. The pair especially enjoys hearing how customers have experimented with their products. One uses the sweet barbecue sauce, Good 'n Sticky, in stir fry. Another douses the dill mustard on pizza. And yet another can clear a jar of the spicy barbecue sauce, Peculiarly Picante, with nothing but a bag of chips. Creativity is the only limit.

The market gives Belford and Jones an opportunity to connect with customers. "You learn what people like and don't like, which helps us change our recipes up a little bit," says Belford.