Rediscover your neighbourhood, and celebrate the late Jane Jacobs' birthday this weekend. 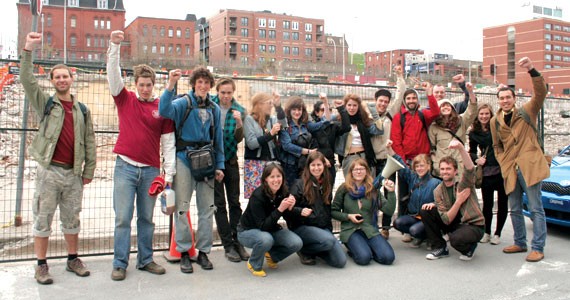 Over 12,000 inspired citizens from Brazil to Slovenia to China will be taking it to the streets this weekend, discovering and rediscovering their neighborhoods and cities. The Halifax Jane's Walks are five of the more than 500 that will be held in celebration of the birthday of the late Jane Jacobs, a brilliant activist and urbanist. On Saturday May 7 the Ecology Action Centre's Janet Barlow will lead you through Clayton Park and give you an idea of what it's like to walk to school in the neighbourhood (11am), and community-development practitioner Sophia Horwitz

invites you on an urban hike of the peninsula's train tracks (2pm). Sunday packs in an exploration of ruderal ecologies with garden doula Jayme Melrose (11am), a trip into the

Hydrostone's past with Kate Mckay (1:30pm) and a look at the little things you north enders might be missing with curious community member and City Mail carrier Alison Creba (4pm). Celebrate the fifth anniversary of Jane's Walk, the 50th anniversary of Jacobs' groundbreaking book The Death and Life of American Cities and the hidden gems to be uncovered in our own backyards.