Dishing out Halifax VegFest highlights in honour of its third anniversary. 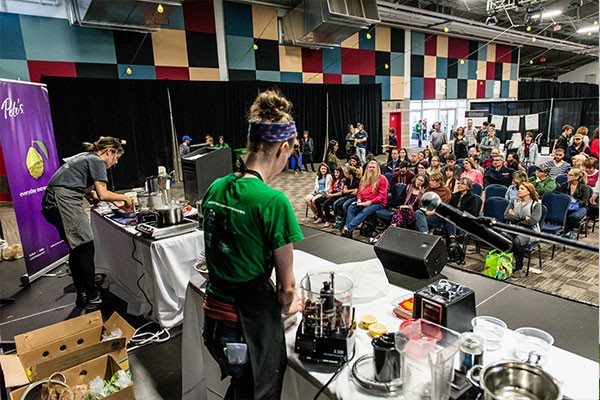 The festival—happening this Sunday from to at the Halifax Forum—is about celebrating vegan and plant-based living, says Jessie Doyle, one of its organizers.

Though the event caters to vegans and vegetarians, it’s more focused on bringing in people who might want to learn about and try plant-based but don’t know where to start. For Doyle and other organizers, that meant working to make the festival accessible. They wanted to lower admissions prices and cut costs so that small local businesses could participate.

“It wasn’t really a great business model, because we didn’t want to charge anyone much money,” says Doyle.

This year, instead of operating a small business, VegFest is volunteer-run and not-for-profit. It’s also pay-what-you-can, with a suggested donation of $5.
“No matter someone’s financial situation, they can come and attend workshops and enjoy the presentations, and not actually have to spend any money,” says
Doyle.

For those interested in vegging out this weekend, here’s a taste of how you can enjoy every last drop of the festival.

1. Explore the exhibitors
Doyle won’t play favourites, but with 50 exhibitors on the lineup—from the Foggy to Bhakti Beauty Care to Vegan Outreach Canada—there’ll be plenty to eat, buy and learn at VegFest this year.

3. Learn about animal rights law from Camille Labchuk
The executive director of Animal Justice, Canada’s only animal law organization, has worked on exposing animal suffering across several industries. She’ll be giving a talk about the rise of animal rights law in Canada.

5. Brett Ruskin
The CBC reporter and Best Halifamous Person nominee in this year’s Best of Halifax will be hosting the festival. Get a good look at the person who, in true VegFest spirit, is about to lose a popularity contest to a plant.