Five ways to do Devour!

Wolfville’s food film festival beckons foodies and movie nerds to get out of town for the weekend. 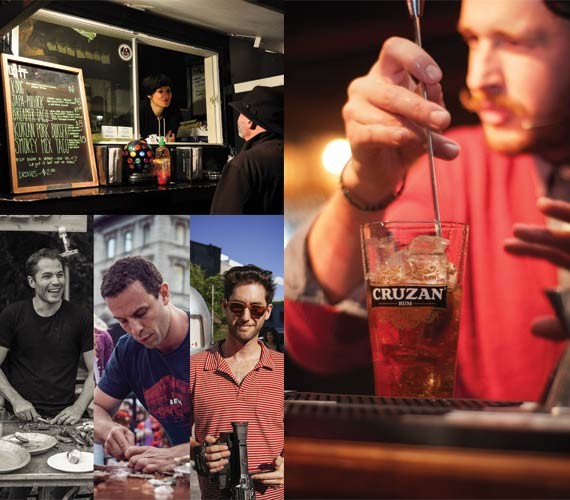 Devour! The Food Film Fest is in full swing in Wolfville this weekend. It all started last night in Hollywood style with the festival's big name, Anthony Bourdain, who was paid a Kardashian-ian appearance fee to get dropped into the middle of picturesque rural Nova Scotia just to be told how fucking great he is. ("My life is really nice." —Anthony Bourdain, probably.)

After one night of partying in what is probably still, essentially, parts unknown to him, the only thing left of Bourdain is the carbon footprint left by his private jet in his hasty exit. Don't fret, though. If you look past that specific party's afterglow, you'll see that there are still a lot of fun things to do at Devour. In fact, when it comes to attending some of the festival's other events, you should take a cue from Bourdain himself and have no reservations.

For instance, in Tony-adjacent happenings, Michael Steed, producer of PBS's highbrow bro-down Mind of Chef and CNN's Parts Unknown, is in conversation about producing food television. Perhaps he'll talk about why only men ever seem to get featured in prestige food television shows.

There are several other interesting food media types as well. The duo behind The Perennial Plate, photographer Matt Armendarizand food stylist Adam Pearson, are attending, offering sessions that food bloggers and Type-A dinner party hosts will be interested in. And several chefs are doing dinners and demos.

And then there are these five things that you should really try not to miss.

1. STEAK (R)EVOLUTION
This documentary by producer-director Franck Ribiere (Friday, 6pm, Al Whittle Theatre) follows a quest to find the best beef, the most mouthwatering meat, the world's superlative steak. From breeding to butchering to the business of bovines, this movie is a passionate exploration of eating.

After the screening there are two meaty dinners inspired by the movie, one featuring chef Jesse Vergen (Saint John Ale House) and chef Sean Laceby (Blomidon Inn), and the other featuring chef Fabian Geppert from Imbizan food truck in Berlin and chef Jamie Smye (Privet House).

Geppert promises a meal that uses beef in all of its forms. "For the dinner we want to cook related to the movie, which is about steak. So we'll go a little bit more into fine dining with three courses and an amuse bouche," he says, of a menu that includes beef tongue, prime rib and sweetbreads.

2. FOOD TRUCK POP-UPS
While Geppert has a long history working in fine dining, his current passion is street food. "On Thursday there will be the big food truck rally in Wolfville," he says. "There are different food trucks coming and I can maybe support them a little and learn about how street food is going on here."

There are actually a bunch of chances to hit up some of Nova Scotia's food truck favourites with midday and late night pop-ups scheduled throughout the festival. On Thursday night you'll find Wolfville's Edible Sideshow Food Truck along with Halifax's Old School Donuts, Tin Pan Alley, Halifax Press and FoodStruck Cantina, with the latter two staying for the full festival alongside the Edible Sideshow.

From truck to truck, you'll see dishes like lobster fritters, shrimp po' boys, gumbo, tacos, braised rabbit poutine, grilled cheese sandwiches and mini-doughnuts. And Geppert might just be popping by with some street food treats of his own.

3. TODD PERRIN
Between the international acclaim of chef Jeremy Charles and Raymonds Restaurant, and Fogo Island's architecturally stunning Inn, Newfoundland is having a Moment right now when it comes to food and travel. Mallard Cottage, chef Todd Perrin's charming, rustic restaurant in Quidi Vidi was just named one of the Top 10 new restaurants by enRoute magazine. The Top Chef Canada alum routinely lives up to the stellar reputation he has built for himself, so getting a cooking lesson from him in Wolfville is a must-do.

At his culinary workshop (Saturday, 12pm, Huggins Science Hall, Acadia University) Perrin will be cooking up Cod Boudin Blanc, a dish that is sometimes on the Mallard House menu. "I do this dish a lot when I travel," says Perrin of the sausage, which features pork, cod and salted cod. "I think it shows people cod fish in a way they're not used to seeing it."

On Sunday, Perrin will be cooking up a storm at the Golden Tine Awards Brunch (Sunday, 12pm, Wolfville Farmers' Market), alongside one of Nova Scotia's best chefs, Fleur de Sel's Martin Ruiz Salvador. He's looking forward to the experience. "Lots of my buddies have been there over the years and they say it's a great time, so I'm looking forward to getting out there," says Perrin, "checking out the films, meeting cool folks and hanging out in Wolfville."

4. FUN WITH MIXOLOGY
The Bicycle Thief's award-winning bartender, Jeff Van Horne, will join Matt Jones, a Whisky Ambassador for Beam Inc. Canada, to host a Happy Hour cocktail lesson (Friday, 4pm, Al Whittle Theatre). That session will give you a nice bit of education before wandering into that evening's cocktail party (Friday, 10pm, Anvil Pub), which should be a gathering place for all the fabulous and famous folks at the festival.

5. SHUCKERS
It sounds like the name of a peeler bar in Captain Jack Sparrow fanfic, but Shuckers is, in fact, a documentary produced by Endorphin Films alongside executive producer—and celebrity chef—Chuck Hughes. Hughes is cooking for a sold-out dinner on Thursday night, and the movie will premiere Friday afternoon (Friday, 12pm, Al Whittle Theatre).

"For me the big thing about oysters is that I just love eating them. It's that simple," says Hughes. He says his involvement in the film just felt natural, as does premiering the movie in Nova Scotia. "It just makes a whole lot of sense," he says. "I think in general we're blessed that most of our oyster producers are the best in the world."

Narrated by and starring co-producer Tim Rozon, who co-owns Montreal's Garde Manger with Hughes, Shuckers focuses on the world of shucking competitions.

"Tim, when [Garde Manger] opened and started shucking, started being interested. You know when you shuck 200, 300 a night it's different than eating a dozen. You start to get fascinated. So he basically had the idea, he wanted to do this documentary on oyster shucking and the culture of it."

If you're a fan of Canadian teen television shows from the mid-2000s that know absolutely nothing about how the music industry works, you'll recognize Tim Rozon as Tommy Q from CTV's teen drama Instant Star. And unless Maestro Fresh Wes is working on a documentary about Spatchcocking chicken called Let the Backbone Slide, Shuckers will forever be on record as the best Instant Star-related food movie ever made. It is definitely a fun look at the unique, obsessive and passionate world of oyster shucking.

Rozon and Hughes will be at the screening with director Jon Deitcher. "I'm excited to cook with everybody, shuck oysters, and just have a good time," says Hughes.