Five Questions for the Great Sabatini 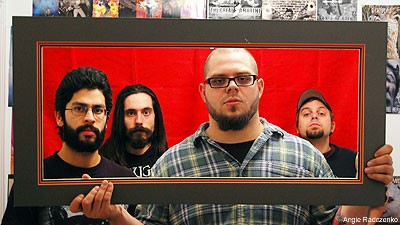 The Great Sabatini (featuring Joey, Sean, Rob and Steve Sabatini) is a bitchin’ heavy rock outfit from Montreal. Currently they are headed on a giant tour across North America, stopping in Halifax this Saturday to play Gus’ Pub with the wonderful Nymphets, Cicada and Fistfight. We asked guitarist Sean Sabatini about his favorite band and how his band deals with getting in trouble with the FUZZ.

1. Who or what is the Great Sabatini? I get sort of a powerful familial vibe from you, like Gene and Dean Ween.

The Great Sabatini is just a simple name for a traveling band. At a glance, it fails to reveal much of anything about our music. Our hope is that once you get to know us and our music, the name will hold some kind of powerful shapes and colors in your mind.

2. I was reading your blog and I understand the last time you played Gus' Pub there was a “cop incident” - care to explain?

We were staying at our friend’s parent’s house. Rob Sabatini has a tendency to wake up earlier than the rest of us to go for walks. A neighbor had noticed that there was a large van parked outside the house, and a very shaggy looking dude (Rob) was roaming around the wooded area behind the house. Soon enough a police officer was banging on the front door. Our friend scrambled down the stairs to explain that the van was ours, Rob was with us and that we had been staying there for the evening.

In the States, Walmart encourages people to crash out in their parking lots. We've done it quite a few times. It's not that bad. Sleeping in the van/car is never really all that great, but you do what you have to when you're traveling. Come to think of it, we've probably slept in an Irving parking lot as well. One night in British Colombia we tried driving through the night after a show but had to stop at a truck-stop to get some sleep. It was perfectly dark out. When I woke up and got out of the van to stretch my legs, the sun was rising. In the half light I had a view from that parking lot that was hidden when we had arrived. It was a fucking epic view of a mountain range. It was pretty humbling. Sometimes waking up in a parking lot is awesome. Other times, not so much.

4. Do you guys enjoy the DIY-style of touring? Do you write a lot of songs on tour or come up with a lot of ideas from the wonderful/terrible/boring nature of the road?

I think I speak for all of us when I say that touring in this DIY fashion has been pretty good to us, and that we all enjoy it a lot. We've had so many amazing times out on the road and we did it all without any label help. Even when things get rough for whatever reason, you know at the end of it all that you survived touring in the most threadbare conditions. We have a great time together on the road 99% of the time anyways. We don't really write music on the road, but occasionally I write lyrics in my notebook when things get boring. Sometimes things happen on the road that are super-inspiring or weird, but most times it's just a normal day. I think everyone takes something different away from the experience.

"Into The Void" to make out to. "Children Of The Grave" sounds like a scrapper to me. "Solitude" is the obvious choice for tears but sometimes the indescribable beauty of Master Of Reality as a whole makes me want to cry.