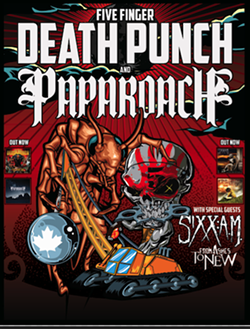 Papa Roach, best remembered for the triple-platinum 2000 album Infest, are proving their intent to be in music for the long haul, touring their 2015 release F.E.A.R. (Face Everything And Rise). With over 20 years of music-making to draw from, Roach fans are sure to hear a varied set list. Five Finger Death Punch diehards, meanwhile, will headbang to hits from the band’s latest album, Got Your Six, which debuted at number two on the Billboard 200 last fall.

These acts share the stage with alt-metal group Sixx:A.M.—rock legend Nikki Sixx’s modern-sounding side project—and post-hardcore band From Ashes to New. The show is happening September 28 at 6:45pm at the Scotiabank Centre, with tickets ranging from $58-$78. Tickets go on sale June 17th at 10am. Get them by phone (1-877-451-1221) or online here.