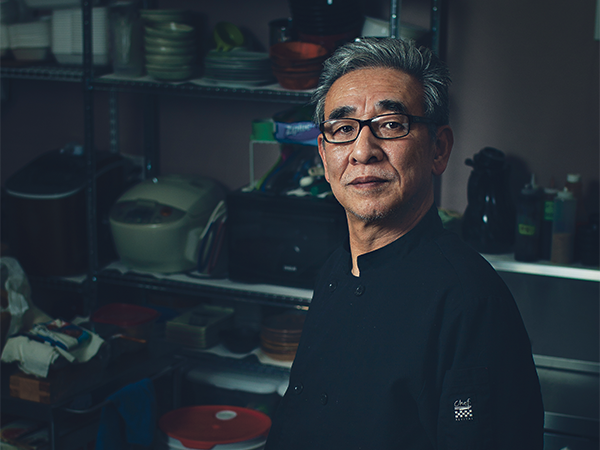 Shigeru Fukuyama has made sushi for more than 40 years. During that time, he worked alongside the likes of Jiro Ono, moved his life from Tokyo to Toronto to Halifax, and cultivated a reputation as one of the greatest chefs in Halifax.

Yet, Fukuyama hasn't lost his sense of childlike wonder. He's humble, sincere and open to possibility. When it comes to his area of expertise, he intentionally cultivates a beginner's mind.

Last winter, Fukuyama and his business partner and wife, Aya Otara, closed Sushi Shige, their well-known and beloved restaurant. After a quiet year-long hiatus that had customers waiting with bated breath, Sushi Shige has reopened at 5688 Almon Street. The decision to move locations was based on what Otara calls "a feeling."

"It was just a good feeling," she says. "We really like the north end."

Sushi Shige originally opened its doors on Spring Garden Road in 2002, before moving to a larger location on Granville Street in 2010. Both locations were remarkably undistinguishable, at least from the outside.

The new location retains Sushi Shige's simplistic and relaxed atmosphere. Homemade artwork from family and friends hang on the walls, and there is room for 15 to 20 people to dine at simple tables and black-framed chairs. This location is even smaller than the last. 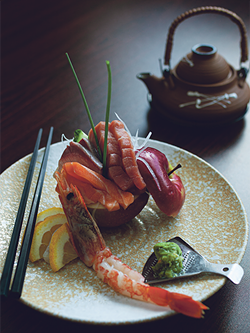 Lenny Mullins
There's a wide selection of fish at Sushi Shige, sourced both locally and from Japan.

"Granville was nice, but it was too big for us," Otara says, pointing out that it's usually only her and Fukuyama working. They have two small children, and while their apartment is conveniently located above the new restaurant, they needed something easier to manage. This way, there is no sacrificing quality for quantity.

Sushi Shige offers a wider selection than what can be found at most sushi restaurants in Atlantic Canada, serving a sashimi menu that depends on what Fukuyama's able to source from Japan and local fishers. Beyond the staples—think salmon, butter fish and shrimp—he often has Black Point oysters, sea urchin, organic salmon, sea bream, local tuna and striped bass. Occasionally, fluke and halibut make an appearance.

Fukuyama's favourite dish to prepare is his omakase dinner. "Omakase," which means "I'll leave it up to you," is a Japanese tradition of letting the chef choose your order. At Sushi Shige, the omakase dinner must be ordered several days in advance, which gives him time to decide what type of dishes he will serve. Fukuyama keeps omakase records that go back 10 years, logging what he served to each person so that people will always get something new if they come again.

"We don't have much time to do things outside of the restaurant, so the customer is a friend for us."

"When the customer is happy, we're happy," Fukuyama says. That small phrase—which both Otara and Fukuyama have repeated many times over the years—lies at the core of Sushi Shige's identity.

"If you give people good food, they're just automatically smiling," Otara says, explaining why they first opened their restaurant. At the end of the day, they enjoy bringing smiles to people's faces.

Over the years, the people who frequent Sushi Shige have evolved from customers to a mixture of family and friends. Otara and Fukuyama have seen customers grow from university students to mid-life professionals. An eight-year-old customer later became one of their part-time waiters. They watched customers propose in their restaurant, and then return years later with their new family.

"It's a story," says Fukuyama.

"The customer isn't just a customer," says Otara. "They feel like family and friends. We don't have much time to do things outside of the restaurant, so the customer is a friend for us."