No need to pinch yourself, you’re not dreaming. This is what 1673 Barrington Street—the longtime home of Certainly Cinnamon—looks like now. Its transition from deserted cafe to moody hangout is at the hands of bartenders Adam MacLeod and Michael Hopper and Field Guide owners Dan Vorstermans and Ceilidh Sutherland, who’ve teamed up in the name of Highwayman, a 40-seater restaurant that’ll transport you directly into an Alfred Noyes poem. “This is where we feel going out to dinner is,” says MacLeod of their commitment to refined service.  “I feel that maybe Halifax doesn’t have a dining experience set up in this way. It’s very interactive. You have to let go of what you think you want and trust. We’re providing a space where you can go in and trust the people working here and learn something you didn’t know going in.” 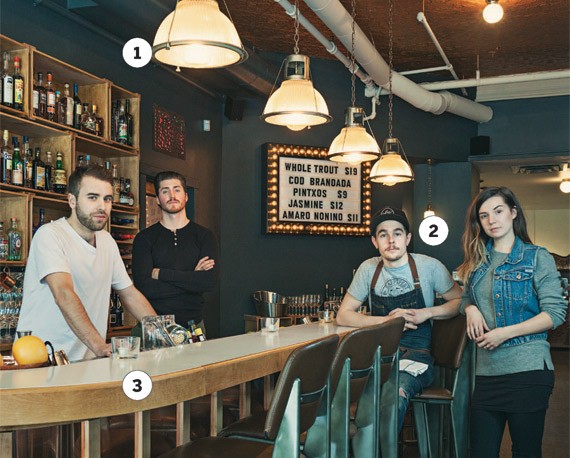 1. It was the first potential location that Hopper and MacLeod looked at that ended up being the winner. The solid skeleton of the Barrington Street space—high ceilings, original tin ceiling tiling, wainscoting—sealed the deal and inspired an aesthetic that calls back to when the building went up, in the late 1800s. “It makes sense being on Barrington Street—it’s a super-old street— to make the space feel old, like it’s been here for a really long time,” says Vorstermans. Renovations and design were mainly at the hands of the foursome of owners—with construction by Sutherland’s father, David, and help from design consultant, Katie Tower. “For us it was about finding a space and developing the vision within that space,” says Sutherland.

“There were just a few things we started with and the name was one of those. This location was another one. And we let those things dictate what happened,” says Vorstermans of the inspiration behind Highwayman’s layout, decor and overall vibe. “We wanted something that could transcend just the name and create an image,” says Hopper.

2. "Owning a restaurant is kind of like when authors have different characters in their books that sometimes just take on a life of their own. You have this original vision, but in a way it shapes itself, the customers shape it, the staff shape it. We had a lot of ideas that didn’t make sense for Field Guide, it has its own personality,” says Vorstermans, who heads up the kitchen at both restaurants. A companion to not a carbon copy of Field Guide, Highwayman’s dinner menu focuses on Spanish food—fresh fish, cured meats, pintxos— oddly enough, it’s a style that makes sense for Nova Scotia. “It revolves so much around seafood, which we have a ton of here, and a lot of other components are things like peppers and tomatoes, but largely preserved. We can get really great fresh tomatoes in the summer and preserve them, and take advantage of that stuff when it’s fresh. And in August and September we can be cooking Spanish food without importing anything.”

3. “I think we want people to be less stuck on the idea of having to order off a menu and having faith in the bartenders,” says Vorstermans. And with accolade-earning staff like MacLeod and Hopper—who tended bar together at La Frasca— on hand, that shouldn’t be a problem. A carefully considered round-up of drinks means diners won’t be drowning in options, and the selection will subtly change every few weeks. “We looked at how you’d eat a meal and tried to fill out each section of the meal in the same way you’d fill out a food menu,” says MacLeod. “So cocktails are largely before dinner, a really good beer and wine list for during and a bunch of after dinner drinks. We tried to develop it around that kind of progression.” 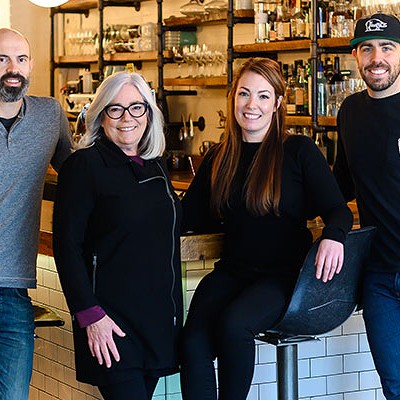