First look at Ramblers Coffee and its “vision for just the perfect cup” | Shoptalk | Halifax, Nova Scotia | THE COAST

Elly Hannon and Adam Pye are learning all the industry secrets to brewing the perfect cup of coffee. “What we both found is that we’re really, really picky about where we get coffee,” says Hannon, taking a break from stamping a vintage car logo onto white to-go cups and brown paper sleeves. “And we love to hang out in cafes, we're both cafe consumers more than anything.”

Hannon and Pye, who are life partners as well as business partners, tell The Coast that their combined experience in the industry—his at various Halifax coffee shops like The Nook, and hers working at The Tare Shop—has given them the insider knowledge to open Ramblers Coffee.

“When I got into making coffee at The Tare Shop, I learned from folks at Java Blend how much more there is to it,” says Hannon, speaking of the Halifax coffee institution that supplied Tare’s cafe counter. Hannon worked at the zero-waste store since its inception, but soon discovered the espresso machine was her “favourite part” of the job.

The duo officially opens Ramblers Coffee today, Thursday October 7, inside north end craft cidery Sourwood Cider (5576 Cornwallis Street, until the street is renamed). Hosting businesses inside its business is becoming a thing for Sourwood, which will be home to Beverly Taco Service once its summer pop-up at Stillwell Beer Garden winds down. 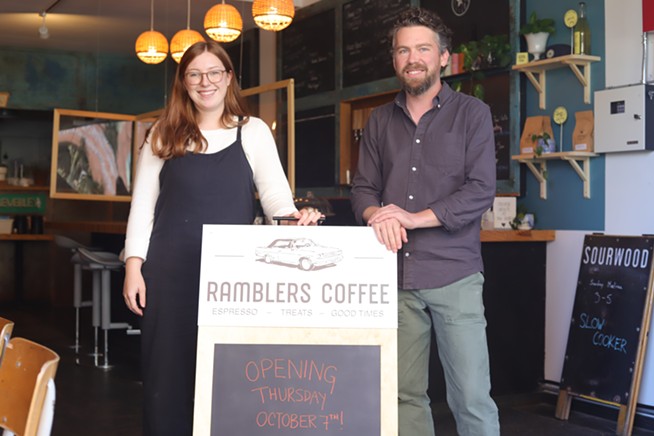 The Coast
Elly Hannon and Adam Pye are the owners of Ramblers Coffee, now open mornings inside Sourwood Cider.

“Having this space open to us just in the mornings, it makes it way more possible for us to do something like this, ‘cause it’s a small-scale business,” Pye says, sitting on a long wooden bench at Sourwood beside Hannon. “It'd be very difficult for us to renovate this or to go into a brand-new space and take care of everything on our own.”

Finding the shared space was, like many Halifax feats, through close connections. Pye used to work in the kitchen at Sourwood, and he’s the bassist in the house band where Sourwood’s owner Jake Foley plays fiddle.

“He's kind of like a family member at this point, and we watched him start his cider venture from the beginning,” says Pye, who points out that Ramblers getting involved with Sourwood makes sense for everyone. “This way we can kind of share responsibilities. It's good for him because he has the space used in the mornings when it's tough for a bar to get people in.”

After securing the space, Hannon and Pye went about finding the other elements to make a great cup of Joe. And there are a lot of elements. “It’s everything,” Hannon says. “Every possible factor is relevant.” The espresso machine, the grind, the water—Ramblers filters its own—maybe even the mug, in this case commissioned specially from Laura Keays. But one thing matters above all.

“We're the first to get beans from them, and he's partnered with Paul Jackson who used to roast at Java Blend, he's a pro roaster,” says Hannon. “So they created a custom blend for us, with us, and it’s the most exciting piece of the whole puzzle for us.”

The beans, also sold at Ramblers in unassuming brown bags for $19, have a flavour combination that evokes s’mores: roasted marshmallow, milk chocolate, graham cracker. “Kind of like a toasted sugar, caramelly type of flavour,” says Pye.

“We had a vision for just the perfect cup,” Hannon says. “And I feel like the beans from Roastery 46 have made that possible.”

The new cafe’s logo features a vintage car, the AMC Rambler, and the name is a nod to the bluegrass band that both Pye and Foley are a part of, the Big Country Ramblers. But it’s also a reflection of the sort of customer Hannon wants to appeal to. “The word rambler means people who walk or drive around for pleasure, like exploring, and I feel like that's really the spirit of the neighbourhood,” she says. “It's a very walkable place and we hope to see people in here who maybe haven't been to Sourwood before who are just passing by.” 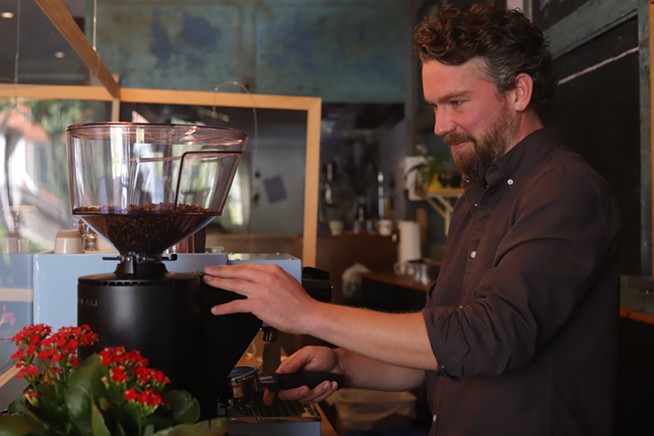 The Coast
Of the elements that go into a cup of coffee, Rambers’ Adam Pye says “beans are most important.”

For now, the cafe will follow the same opening days as Sourwood, meaning a Wednesday through Sunday schedule, from 7am to 1pm. Sourwood opens at 3pm; eventually, Pye and Hannon want to expand the hours so there’s no closure period between Ramblers and Sourwood.

“We’ll meet in the middle, so it’ll roll right into bar service,” says Hannon. “And then hopefully by the winter we’ll be able to collaborate on brunches with Beverly Tacos.”

Speaking just days before Ramblers was set to open, Hannon and Pye feel the hardest work is behind them, and the real treat will be serving espresso and lattes to their north-end neighbours.

“We actually get to talk to people again, it's been such an isolating year and a half,” says Hannon. “We’re really excited ‘cause we’re finally done all the hard work, and now It's kind of the fun time,” adds Pye. “We can stamp cups, we can make coffee, we can give it to people.”