Opening a community pharmacy is a lifelong dream for Greg Richard.

the coast
Greg Richard, 28, is the owner of Boyd's Pharmasave.

While some children have fond memories of going to the candy shop or the toy store, Greg Richard’s memories are of trips to the local pharmacy.

“When I was growing up, I remember going to the pharmacy. Maybe that’s a weird thing but I remember it, and I remember being just so impressed with this feeling of they know me, I know them and it’s almost like a family-type feel,” he says. “Community pharmacy has been like, pretty much the only option for me.”

Richard wears a blue sweater with a nametag pinned on, and although he has a black face mask, you can tell he’s smiling underneath. He’s approachable. Between chatting with a maintenance guy and helping a senior find some insoles, he sits with The Coast in the bright back office of the new Boyd’s Pharmasave at 2525 Agricola Street, the same place he hears patients’ needs and writes prescriptions.

the coast
The store has a large selection of local products, as well as the essentials like toiletries and medications.

The first few days since opening March 1 have been busy, Richard says. “We had a ton of people popping by, checking us out to see what we’re offering and kind of making some suggestions on things that maybe we could offer for the community as well, so it’s been super cool. It’s been busier than I’d anticipated which is really a pleasant surprise.”

When the pandemic hit last year, Richard and his partner Stephen Doyle were living in Fredericton, NB. “We were happy in Fredericton,” Richard says, “but our family was either in Miramichi or in Halifax.” The couple graduated from Dalhousie’s College of Pharmacy in 2016, and Richard spent the first few years of his career working at local pharmacies–Pharmasave in his hometown of Miramichi, a Costco, Jean Coutu and PharmaChoice.

But when Richard thought back to that kid watching the pharmacist with awe, he knew his real goal. “We were ready to make the move, so I said to him, ‘If we’re going to make the move, I want to open my own pharmacy. I’ve always wanted to do it, what better time than now?’”

Last July, Richard found the place on Agricola Street, the former Smith’s Bakery. Doyle’s job at the IWK’s poison control centre allows him to help out, but Richard, 28, is both owner and pharmacy manager. 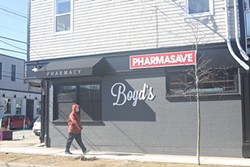 the coast
Boyd's hopes to be accessible to the whole community, not just a subset.

“The north end has this small-town feel to it and it’s this close-knit community vibe, and it really just resonated with me and spoke to what we wanted to offer to the community as well,” Richard says.

The pharmacy is named after Richard’s maternal grandfather Boyd Waye, who was a business owner in Miramichi. “He was the type of person that would do things for others with no expectation of financial compensation, he did things for the right reasons,” says Richard. “That’s what, I think that’s what pharmacy needs to be about too.”

Richard is excited to start meeting locals in the north end and providing some services to the 2SLGBTQ+ community that aren’t available at most pharmacies.

“We’ve done a little bit of extra training to administer testosterone and other injections that are administered in that way,” says Richard. Right now, most Nova Scotians who require hormone injections have to go to their family doctor, a walk-in clinic or a sexual health centre.

The pharmacy also has connections in the queer community that can help people on whatever journey they’re on. “To help people navigate the healthcare system, the drug plan system, just to point people in the right direction. It’s not easy to navigate, wait lists are long,” Richard says. “I can’t expedite a wait list, but I can at least point people in the right direction and hopefully get them to where they’ve got to be sooner.”

In the future, Richard hopes Boyd’s will be able to expand and offer even more. “I would really love to offer PrEP prescribing, HIV prevention medication.” And though Boyd’s offers these unique services, he also doesn’t want to be pigeonholed as just a queer-friendly pharmacy.

“Of course, the story is we’re offering services that aren’t readily available elsewhere, we’re improving access to like queer and trans healthcare, or putting an effort in to show we’re visibly accepting and open to everybody,” he explains. “But that’s just one small piece of the whole picture.”

Boyd’s also carries everything any other local pharmacy would have, including a wide variety of toiletries, snacks and a section of locally made goods. But Richard does hope to be a leader in good, accessible healthcare.

“I would say Nova Scotia is definitely a leader in pharmacist services. Just within the last 10 years there’s been so many changes for pharmacists and we’ve really been able to step up and fill like multiple gaps in the health care system,” he says, giving the example of flu shots, which have been given at pharmacies in NS since 2013. More recently, as of December 2019, pharmacists are able to prescribe birth control.

“This is exciting for the queer community right now, but in 10 years time hopefully this wouldn’t even be a story,” Richard says. “Hopefully every pharmacy will be able to offer what we’re looking to offer. That’s the goal.”