Ian Selig
Wendy Friedman operated Biscuit on Argyle Street for 23 years, but a new era is about to begin.

The fashion boutique leaves its longtime downtown digs to open in a fresh new space in the north end Saturday, October 2.

Biscuit has been a fixture of Argyle Street since 1996. The curated shop was ahead of its time in bringing “local love” to Halifax, whether it was through fashion, accessories or a range of giftables that everyone wants to receive.

Over the years, Biscuit General Store—named for owner Wendy Friedman’s upbringing in the American South, where warm biscuits are always on the dinner table—grew into an established business. But Biscuit has also seen downtown Halifax grow up around it. Chain stores and fast food, taller buildings and higher rent. Plus the thrill of spending years across the street from the convention centre construction site.

There's no place like Biscuit: Wendy Friedman looks back at Biscuit General Store’s 20 years in business.

“Downtown was getting more and more corporate, to tell you the truth,” Friedman says, “with chain restaurants and chain stores coming in, big developers owning all of the buildings instead of local people.”

Friedman, who lives in the north end, wanted to cut down her commute and open a store in her own community. “I've lived in the north end for 23 years, it’s my neighbourhood and I always wanted to have shops here,” she tells The Coast. “And so seven years ago, I opened my home store on Gottingen street, Independent Mercantile, as my first sort of seeing, like, Can I have a store in my neighbourhood? Can I really work? And it’s worked out really well.” 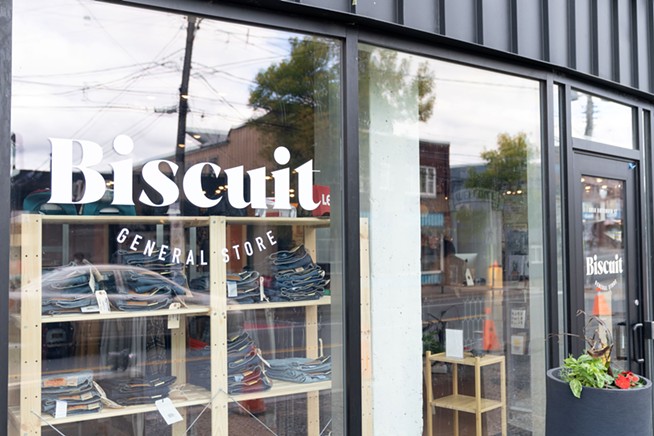 Ian Selig
Biscuit’s new floor-to-ceiling windows will give passersby a glimpse inside before they open the door.

So when she heard about a new building under construction at the corner of Gottingen and Falkland Streets, Friedman decided to look into it more. And she must have liked what she discovered, because Biscuit’s new home is 2050 Gottingen Street. Opening day starts Saturday, October 2 at 11am.

“I was sort of looking around but it’s hard to find a space big enough in the north end,” says Friedman. “But what ended up coming to mind was if we could design a space from scratch, can we do the same kind of thing we're doing in a smaller space?”

Being involved in the construction made more room to modify the design for Biscuit’s exact wants and needs. “I'm really happy with how the place is shaping up and how we designed it,” Friedman explains. “We’re doing all the last-minute things that have to happen, but it’s mostly exciting.”

The new store is smaller, meaning a stock room will exist elsewhere in the building, and the Biscuit offices have moved to Friedman’s own home, but it is a lot more accessible. “Our new space is all on one level, and we have an automatic door,” says Friedman. “It’s going to be much more easy for differently-abled people or people with strollers.”

Ian Selig
The new space is smaller but feels larger thanks to modern touches and fresh white paint.

Still a Southerner at heart, Friedman says “it’s against every bone in my body” to not be able to hold a grand opening event with food and drink this weekend due to COVID. Instead, Biscuit will plan giveaways on Instagram over the next few weeks. “We’ve got lots of businesses here in the neighbourhood that have given us gift certificates,” Friedman says.

Biscuit’s customers can also expect rebranded shopping bags and product tags. But Friedman says the store will still give customers the same experience of shopping for high-quality products that are chosen just for them, just with a different look and feel.

“Especially after having been through like, the debacle of the convention centre, and the pandemic, says Friedman. “It just feels really nice to have a space that feels fresh.”