Finding the Disappearance at Clifton Hill

A film entrenched in its sense of place makes a case for shooting local. 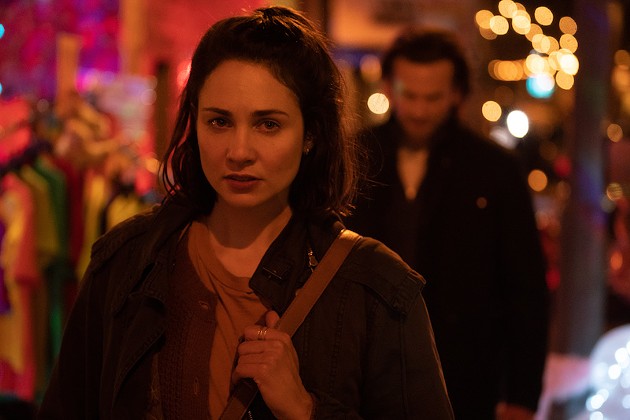 Submitted film still
Tuppence Middleton feeds your true-crime addiction as she plays a woman remembering a kidnapping she witnessed in childhood, diving into Niagara Fall's underbelly while searching for the truth.
There have been movies casting Niagara Falls as a central setting, but none have quite captured the split personality of the kitschy tourist town quite like Disappearance at Clifton Hill. “I have some personal history with the city,” says Falls-bred filmmaker Albert Shin recently about his latest feature, opening February 28 at Cineplex Park Lane. “It’s not a neo-realist film about Niagara Falls but I thought the city itself, in its duality and with all its contradictions, were ripe for a cinematic treatment.”

As such, Shin weaved a story in the dark shadows of the Falls’ gaudy magnetism: Focusing on a former resident who returns after the death of her mother only to become obsessed with a kidnapping she believes she witnessed as a child. For a showy spot like Niagara Falls—with its seedy casinos, tawdry wax museums and rundown roadside motels—Shin’s noir mystery is as dark as he pitched it to his leading actors, like “Chinatown in Niagara Falls”.

“Chinatown is definitely one of (my inspirations),” says Shin of the Oscar-winning 1974 thriller set in turn-of-the-century Los Angeles. Shin's inspirations also include director Bong Joon Ho (Parasite) and his early film Memories of Murder, a dramatization about Korea’s first serial killer: “Just the tone of that film and how that film deals with obsession was a big inspiration for me.”

Bong Joon Ho isn’t the movie’s only connection to cinematic elite, either. Shin was very fortunate to curiously find a certified film legend amongst his company, casting revered director David Cronenberg (Eastern Promises, The Fly) as an offbeat conspiracy podcaster who helps keep Clifton Hill at a constant simmer.

“I wouldn’t be presumptuous to say I could write something and just have David Cronenberg be in it but interestingly enough, he was the easiest person to cast in this movie,” recalls Shin who landed the Canadian icon last-minute. “I met with David at his house and literally a few days later I was throwing him in the Niagara River in a scuba costume. It’s very serendipitous how things work out so my takeaway is that nothing ventured, nothing gained.”

Shin cannot say he had as much ease obtaining permits to shoot his gritty drama in Niagara Falls, a city that’s notoriously stingy about their public perception. He adds that type of myopic thinking is one of the challenges of filming in smaller Canadian cities versus large film markets.

“The movie needed to be shot in Niagara Falls so it wouldn’t have been any other way,” says Shin, adding that he is a big booster for all local film industries—including Halifax.

“If a movie takes place in Halifax I think it should be shot in Halifax. I don’t know why you would shoot a film that takes place on the Atlantic coast and shoot it in studios in Toronto,” adds Shin. “I think you not only lose a little bit of je ne sais quoi but I think you lose the integrity of the movie in some ways.”