Film talks continue but is any progress being made?

Hurry up and wait, for NS film industry. 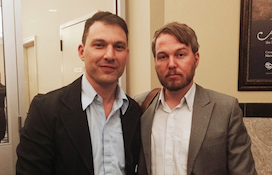 Progress: that is the (hopeful) word of the day regarding the latest film tax credit meeting held Wednesday morning involving Screen Nova Scotia and finance minister Diana Whalen. Scott Simpson and Marc Almon of Screen Nova Scotia say they’ve engaged in some constructive dialogue with the government regarding this matter. Their goal seems to be clear: to hold onto a competitive industry that attracts talent rather than pushing it away.

“We’re not negotiating a deal. This is a discussion and a consultation with the government,” says Simpson.

Deal or no deal, the film community has questions requiring answers that aren’t being delivered just yet.

“We think we’re close. We’re confident we’re moving forward. We’re definitely moving the ball down the field and there’s a mutual desire to get it done quickly,” says Simpson.

Simpson and Almon acknowledge there are complexities on both sides of the issue.

“There are a lot of different pieces of the puzzle. I think people have come to understand over the last few weeks that the film and television industry is a complex industry. There’s a lot of moving parts, and when you change one it changes others. A lot of it’s been about trying to offer feedback on how those moving parts work together,” says Almon.

Minister Whalen says the film industry and the government have come to a better appreciation of the other’s circumstances.

“I think that the discussions have been positive simply because we both understand each other’s positions better. I think that’s very important. We’ve had good chance to discuss the situation the province of Nova Scotia is in as well as the needs of the industry. We agree on a lot of things, and we are moving towards a common ground,” says Whalen.

The next meeting between film representatives and the government is happening right now.