Film review: Can You Ever Forgive Me?

Melissa McCarthy goes dramatic in the true story of a writer in trouble with the FBI. 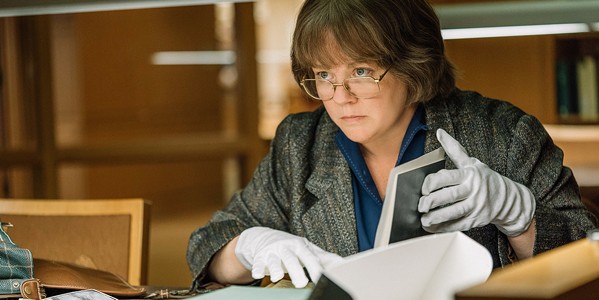 McCarthy's got her fraud-ing glasses on in Can You Ever Forgive Me?
Marielle Heller made one of the most striking debuts in recent memory with 2015's The Diary of a Teenage Girl, the real and unflinching coming-of-age story of a California teen. It was tough, tender, funny and poignant—all qualities found  here in her follow-up, Can You Ever Forgive Me?, though it's toughness that dominates long before the softening.

Melissa McCarthy is one of the funniest women alive yet the movies she's in rarely live up to her talent—Spy was the last truly worthy effort—so she often picks one speed and locks in. Lee Israel requires more: A fading writer working on an unwanted Fanny Brice biography, Israel finds fast cash in forging letters and other correspondence by famous authors, able to more-than-reasonably imitate the likes of Dorothy Parker, Noël Coward and Ernest Hemingway and sell them to rare bookstores. (As with this week's The Front Runner, there are many events in this story that could not happen now.)

Israel is bitter, bitchy, bordering on desperate; moreover she is achingly, terribly lonely. There is an ex who appears briefly—in the form of the great Anna Deavere Smith—and one of the bookstore owners, Anna (Dolly Wells), complicates Lee's whole operation by getting a crush. But generally it's Lee and her cat, until she trips across Jack (Richard E. Grant, pure entertainment), a homeless, barely functioning alcoholic nearly as lonely as she is. He ends up being her scam assistant, though their relationship is prickly at absolute best, especially once blackmail and the FBI come calling. (McCarthy and Grant are lovely together.) McCarthy does not have any action sequences or physical comedy to rely on—she practically fades into the New York slush, she's so unseen—so she works straight from the brain and the heart, cutting and regretful, unable to see her way out of this mess. It's a heartbreaker of a performance.

The screenplay by Nicole Holofcener and Jeff Whitty crams in as many disgusted McCarthy one-liners as it can, making Can You Ever Forgive Me? feel like a near comedy at times. But it will sit with you long after, how we become sad and then hard and so close to giving up, wondering what we're doing all this shit for—for this life?—only to walk through a door and see a smile that offers something new. Lee Israel died in 2015, at 75. It's believed some of her forgeries are still in circulation.