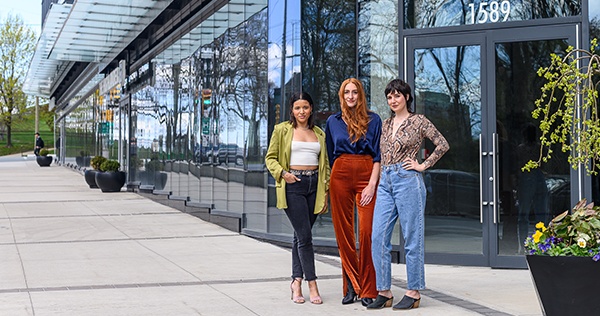 The two-level restaurant in the Pavilion on South Park Street will open in fall 2021.

When Field Guide opened on Gottingen Street eight years ago, Ceilidh Sutherland was new to the game. Now, she and business partner Katie Tower are old pros, and planning to open a second restaurant later this year.

“Obviously it being a pandemic is touch and go, but we know that ideally it won't be a pandemic forever,” says Tower in a phone call with The Coast. Although she’s only been co-owner for less than a year, Tower’s been a Field Guide server for six years and involved with the intimate dinner and cocktail spot since its inception.

“I was doing freelance work and ended up doing the branding for Field Guide way back eight years ago when I first opened,” she explains. “So I’ve been involved in the business and around forever, pre-Field Guide basically.”

Last September Tower came on board as co-owner, and now the Field Guide team is venturing into new territory. “We've been shoring up our business relationship sort of separate from our friendship,” says Tower. “And we’ve had this all-day concept in our minds for a while now, I'd say the better part of five years.”

20 things to eat right now: The days are longer and the sense of adventure is jacked right up there with the Humidex. With that and Halifax's ever-growing bounty of good meals in mind, we’ve rounded up a selection of snacks and dishes to explore and indulge in.

Along with head chef Natalie Rosen, the two will open the new restaurant at 1601 South Park Street—the Pavilion building owned by Southwest Properties, which is now home to Highlander Spa, Tsujiri and the YMCA.

“We got this idea that maybe it’d be a good time to see what developers were wanting or needing,” says Tower. “What they were looking for in their spaces, and what kind of partnerships they’d be willing to take on.”

The trio originally had their eyes set on another new development, but after it fell through continued working with a leasing agent. “We discovered through that process that basically, developers are pretty eager to partner with entrepreneurs and to make things work,” says Tower. “We were feeling really positive about the way that Southwest accepted our idea and gave us encouragement, and they gave us a lot of support for our concept.”

While it’s still a concrete box right now, working with local design firm Bricks + Birches will allow for plenty of creative elements. The as-yet-unnamed restaurant is slated to open this fall.

While Field Guide will stick with its dinner-only hours, the new spot will welcome a morning, lunch and evening crowd. “As someone who tends to dine out during the day because I'm usually working at night, there just aren't that many options for a nice bougie, for lack of a better term, experience during the day,” says Tower. “There’s a lot of awesome casual spots, obviously in the summertime there's tons of patios, but we wanted to fill the gap.”

The food will be diverse–everything from seafood to pasta to elevated diner food like burgers—and it won’t exclusively be the shareables that Field Guide is known for. The larger kitchen and gas stoves will allow Rosen to get even more experimental with her dishes.

And while management will go back and forth between both restaurants, there will be up to 20 new staff hired to help run the two. “We want to make sure that both spots are being treated with the reverence that they deserve,” says Tower.

And for Field Guide’s faithful customers, the attention to detail and unique style it’s known for won’t be disappearing anytime soon.

“It's going to stay true to its roots,” Tower says. “Because we want to grow and change as people, we decided to do that in a different place as opposed to change Field Guide. ’Cause we think Field Guide is wonderful, it has its very cute and lovely spot in the dining culture of Halifax.”