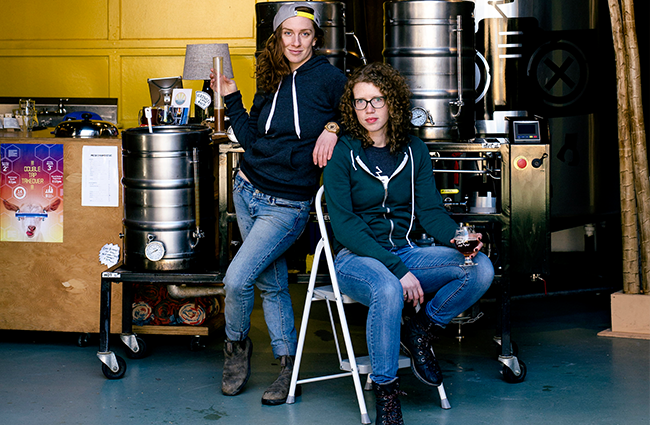 NXN PHOTOGRAPHY
Erica Fraser and Kelly Costello are brewin’ it for the ladies.

Stacks of beer coasters gussy up the bar and robot-themed objects catch your attention throughout the two-level taproom, but you won't see any pink streamers at Good Robot Brewing Company on International Woman's Day. Instead, on March 8, Good Robot employees Erica Fraser and Kelly Costello will showcase beer on tap by women brewers to recognize and celebrate the accomplishments of women, historically and in modern society, while challenging the status quo of what it means to be a woman. They're calling it Femme-Bot.

"No pink, no boob-shaped cookies, no boxes to fit into," Fraser strongly asserts. And she is not alone. Fellow brewer and co-worker Costello has been working alongside Fraser to put together a representation of the accomplishments of women, both in and out of the brewing industry.

Baba Yaga Chaga Brown uses mother nature's bounty of medicinal chuga fungus in brewing and references a powerful older woman in Russian folklore. These two brews were made by the ladies on staff at Good Robot.

Megan McDowell, Ardath Whynacht, Bria Cherise and DJ Alfalfa Brown will enrich Femme-Bot by contributing food, art, music and discussion. And there's lots to discuss according to the organizers, like how it's hard to change the attitudes of people who can't see the potential or want to limit the involvement of women in the brewing industry—any industry, in fact.

Fraser and Costello believe you have to call out misogyny. Femme-Bot is another way to change such behaviour, but it is also a celebration. "It feels like it gives us an opportunity to be more than what society has given us, to be the point of the show, to be like the most important person in the room instead of being supporting role, which we often get relegated to," says Costello.

As part of shining the limelight on women, female employees will not work on March 8. The men of Good Robot will take over the serving duties.