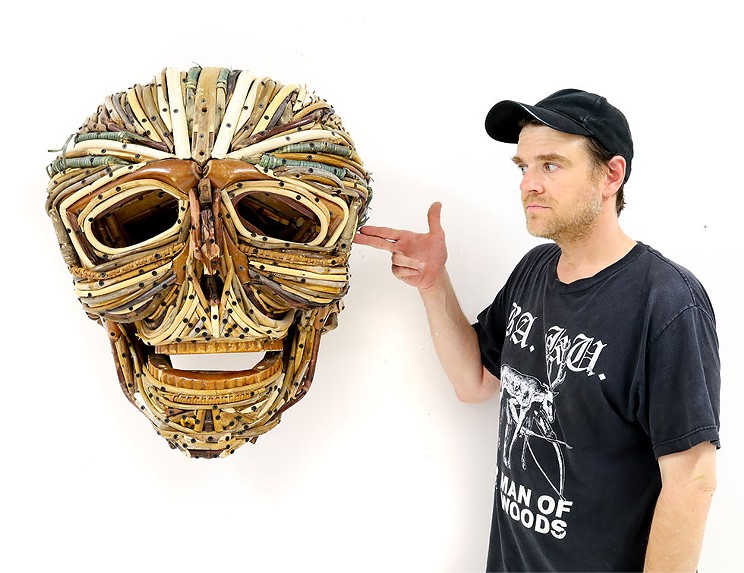 submitted
Johnston Foster created a range of sculptures, including this skull, using only broken wooden furniture.

Why you need to see the Nova Scotia-based artist’s first Canadian solo show at the Chester Art Centre.

Johnston Foster’s latest sculpture show at the Chester Art Centre began from a sort of mystical destiny. The American-born artist moved to Nova Scotia roughly nine years ago, but he had been laying low in the local arts scene up until around two years ago.

Back then, Beverly McInnes—a board member at the Chester Art Centre—had been staying at a 21c Museum Hotel in Arkansas that permanently owns one of Foster’s installations. She wanted to learn more about who created the piece, and upon learning that Foster was living in Nova Scotia, she tracked him down about possibly doing a project with the non-profit art centre.

Now, Foster’s first solo show in Canada, Olde Growth, is running at the Chester Art Centre. Until September 12, people have the chance to enter a mythology-filled animal kingdom to see various sculpted animals and creatures entirely made of broken wooden furniture.

About a month before the COVID-19 pandemic hit Nova Scotia, Foster had started putting together the Olde Growth sculptures. Once everything started shutting down, his daily routine slowed to a crawl. Typically, it takes him anywhere between six and 12 months to create a show. But with Olde Growth, he had more time to focus and fine-tune the details of each piece.

That slower pace worked in Foster’s favour: his work centers around found objects, or what he calls “scavenged, recycled, repurposed materials,” but wood isn’t a medium he usually incorporates. Despite stockpiling various wooden objects since he came to Nova Scotia, his art has mostly focused on using recycled plastics, bold colours and graphic imagery.

But when asked to create an exhibit for the Chester Art Centre, Foster wanted to challenge himself to create a body of work that was user-friendly to the centre’s audience, fit the aesthetic of the seaside community and upheld the integrity of the building’s domesticity and imperfection.

Foster has been creating art through an alchemic approach for nearly 25 years. Throughout that time, he’s been exhibited across the United States and Europe in places such as MoMA PS1, San Francisco’s Yerba Buena Center for the Arts and the Massachusetts Museum of Contemporary Art.

As an artist, Foster finds excitement in the unexpected and values variability. He’s always been sort of a scavenger and hoarder, and that unpredictability—both in his vision and the objects he finds—feeds into his art. “I want to be surprised,” he says. “I want there to be exploration; I want there to be something that is beyond what I had in mind.”

In Olde Growth, Foster’s sense of artistic intuition and improvisation is on full display. “I made each piece one at a time, improvised, followed the work,” he says. “They kind of told me what they wanted to be. A lot of the work is attaching pieces together and [thinking], ‘What is an object telling me what it wants to be?’”