It's a smooth transition from wrestler to assassin for Dwayne Johnson.

Dwayne Johnson may have finally dropped his old wrestling nickname, but the slab of muscle formerly known as The Rock still performs like he’s in the squared circle. He’s all glowering eyes and bulging biceps as a man who finishes a 10-year prison bid and instantly sets about gunning down the scuzzbuckets who killed his brother. For a giant whose face is plastered all over the news after each assassination, he’s also amazingly difficult for other characters to recognize or hit with bullets. Realism is a foolish thing to expect from a movie like this, of course, and in fact the problem with Faster is that it doesn’t fully embrace its campy side. Only Billy Bob Thornton, as the junkie cop tailing Johnson, brings the requisite sleaze.

Faster is not showing in any theaters in the area. 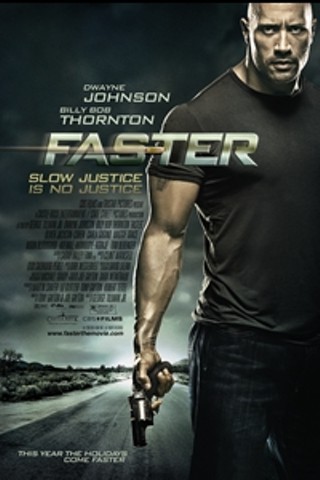