From country to crust, punk to pop to prog, we’ve left no stone unturned in our search to bring you our biggest Fall Music Preview yet---the most comprehensive list of fall releases from locals old and new. 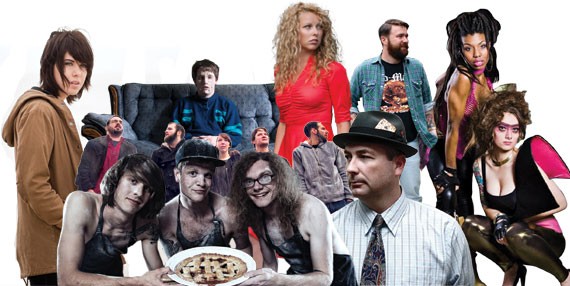 Above player not working? Check it out direct on Mixcloud

Charlotte Day Wilson
Palimpsest (Independent)
New Halifax transplant is already adding to our rich scene of folky singer-songwriters with her debut album, written, performed, recorded and produced solo, by Wilson's own hand, in her own apartment. Stunning stuff. September 27

Cold Warps
Don't Haunt Me, OK?/Stuck On An Island (Noyes)
A desperate, power-pop-laden plea to the dead/friends. Moral of the story: Being lonely sucks but it's certainly better than being haunted by god knows what. September 25

Floodland
Shake and Rattle (Independent)
Jangly guitars produce a lot of pretty riffs together with a decent amount of loud-quiet-loud vibes and earnest lyrics. September 29

Greensleeves
Greensleeves (Independent)
Bluesy folk-rock drenched in twang and 1970s appeal that belies the fact that this band is pretty darned young. Work it, Greensleeves.

Jenn Grant
The Beautiful Wild (Six Shooter)
See our feature for more about Grant and her September 25 release. Release sho September 21 at The Spatz Theatre

Jenn Grant - In the Belly of a Dragon

Klarka Weinwurm
Continental Drag (Saved By Vinyl)
She of the uniquely quiet-yet-powerful voice turns out an album of spooky power. Let it guide you through walks in the fallen leaves. September 4

The Lucy Grays
When Pluto Was A Planet (Prehistoric)
The Lucy Grays deal in emotion. Orchestral sounds with dark edges make every trip to the grocery store worthy of a cinematic release. Release show September 14 at The Company House

Matt Mays
Coyote (Sonic/Warner)
Read all about the long-awaited album in our feature here.September 4

Matt Mays - Take it on Faith

SheMachine
SheMachine (Independent)
The electronic two-piece releases its EP at the same time as the video for "A New Addiction" in all its retro-future glory. Eighties synth pop with a bit of gloom and a lot of glitter. September 29

The Stanfields
Death & Taxes (Groundswell/Warner)
Longtime fan favourites in the Coast's Best of Music poll release another hard-drinking good time dance soundtrack for you to clink glasses to. September 18

Steady Hills
Alone In The Marquee
As the title indicates, this duo's debut EP was recorded alone in Halifax's Marquee Club. For one track the band solicited guests vocalists to sing a section, getting 15 submitted pieces, one from as far away as Arkansas. September 18

We're Doomed
Business As Usual (Independent)
We're Doomed asked all their favourites to be involved with this one: Produced by Jon Epworth, mixed by Matt Bayles (Mastodon, The Fall Of Troy, Pearl Jam) and mastered by Alan Douches (Every Time I Die, Converge, Brand New), expect more of the heavy prog metal that you've come to love. Release show September 29 at Michael's Bar and Grill

The Caravan
Logistics (Independent)
Two years in the making, the second full-length album for The Caravan promises to sound "bigger and more aggressive" than its jazzier, acoustic based debut, "with a few genre bending songs and some classic hip-hop inspired ones as well." October 15

Don Brownrigg
It Takes All Kinds (to make this world, I find) (Independent)
Halifax's most beloved guest vocalist (Brownrigg's voice has been featured on 20 local releases since his debut) releases his sophomore LP. See what every other musician in Halifax already knows. October 23

Don Brownrigg - No Smoke, No Gun

Erin Costello
We Can Get Over (Independent)
Songwriting the likes of which you've not seen in years and carefully orchestrated sounds will rule this roost. October 9

Everyone In Cars
Sea Phases (Independent)
Brothers Mike and Adam Gabriel offer indie rock purity about the classic topic of girls with their vinyl release of their first full length Sea Phases.

Everyone in Cars - On Mondays

Fat Stupids
...Are No Fun (Poor Sport/TBA)
Prepare to keep getting up and running to the record player all October long. Fat Stupids' new seven-inch burns through four tracks of punk gold.

Holy Snappers - Send Him Out

J.J. Purple
Catch Up (Hot Money)
The much-anticipated cassette is on the horizon. Expect of lots of cool noises, interesting percussion and a nice, warm, homemade feel. Like cookies!

LetterBlue
Long Blinks (Independent)
This band has been jamming above an upholstery shop on the Bedford Highway every Monday for six years. Listen to what all the sleeping chairs and couches have been experiencing.

Old Man Luedecke
Tender Is The Night (True North)
The fourth full-length from the Old Man who can do no wrong. Recorded in Nashville, Tennessee at the Butcher Shoppe Studio by David Ferguson. It must have been, because he's the only 10 we see. October 2

Owen Steel
Tynan's Blues (Independent)
Conveniently timed to be released for Pop Explosion, Steel's new batch of bluesy folk will be distributed via poster, specifically large, homemade posters with download codes on the back. October 15

The Rebel Prospects
Unkindness
Debut album presents you with classic hard rock in the vein of ZZ Top with a bit of southern Allman Brothers Band grooves for good measure. October 2

SYSTMS
Fresh to Death (SUPER BAD BASS)
Available for free download because SYSTMS are nice like that. For fans of electronic dance music, from house to dubstep, drum and bass to glitch-hop.

Chris Martin
Paper in the Breeze Let's Riot!)
The Trouble Shooters' Martin dishes out stripped-down retro-roots sounds on a new label that he and partner Tiffany Spencer launched this summer. Expect more rockabilly, blues, rock and roll, country and honky tonk from these two go-getters.

Dana Beeler
The Long Goodbye (Independent)
Folk songstress with alt-country leanings releases her debut full-length that is too beautiful for your ugly ears, you goon. Release show November 2 at The Company House

Gianna Lauren
On Personhood (Forward)
The six-song EP was recorded live off the floor and features Lauren, surrounded by friends, singing her heart out in a barn-turned-studio. Plenty of locked-in spooky grooves.

Grassmarket
You are for the Ocean (Independent)
The poppy Americana trio releases its third album, which the band is calling "a treatise on family, mortality and helicopter-assisted hunting." So, the usual. Release show November 24 at the Company House

Lindsay Duncan
Before I Knew (Independent)
Duncan's debut EP features melancholy and sweet songs about love, loss and what comes after.

Lindsay Duncan - Before I Knew

Long Weekends
Tell it to My Heart (Independent)
Six songs that promise to be equal parts dark and punk and '70s powerpop appreciation. Cross your fingers for a wee bit of falsetto over thundering toms.

The Vagrant Hearts
The Vagrant Hearts (Northwood Ranch)
The heartfelt group humbly presents its debut full-length. Like most men, they enjoy Springsteen and it shows not only in their flannel shirts with the sleeves rolled up. November 20

Breagh MacKinnon
Where the Days Went (Independent)
A voice as smooth as silk and a rootsy, wistful sound mellow you way out.

Dusty Keleher
A Capella (Independent)
Keleher looked to Ireland, Scotland, England and Wales for inspiration, and recorded an LP of folk songs and stories, as the title implies, a capella.

Like A Motorcycle
Naked Pictures (Dev Com)
The grunge rock trio is hard at work finishing up the follow up to last year's Dress Decent. Currently making a hell of a case for band with the most swagger in Halifax.

PANOS
PANOS (Independent)
Pop, free-jazz, improvisation, and indie rock meet in the middle with Panos Giannoulis' debut. Described as "a dreamy record with spells of aggression."

Silent Order
Survive The Darkness (Independent)
Slinging "raw, noisy, blown out punk rock" with the intensity of 1,000 burning suns is Silent Order. Touches of crust? Vocals that don't hold anything back? I'm all in. Release show is November 2 at Gus' Pub

Stephanie Johns is the arts and food editor of The Coast and loves emailing bands with her various requests.