From slice-of-life essays to a Vonnegut-esque classic-in-the-making, here’s the books to curl up with this autumn. 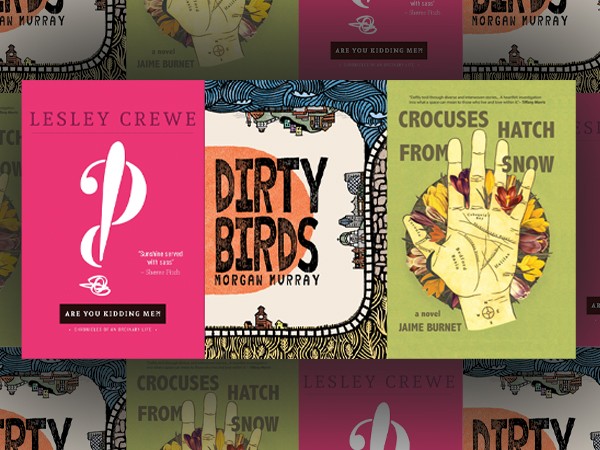 Are You Kidding Me?!: Chronicles of an Ordinary Life

Lesley Crewe has written a boatload of novels. One of them, Relative Happiness, was made into a feature film and enjoyed by audiences at the (then) Atlantic Film Festival in 2014. Crewe is known for her long-form fiction, but she's also known for taking the details of everyday life—the panic over a misplaced wallet, the pleasant memories of long-gone loved ones, the smothering affections of elderly cats—and crafting them into hilarious and poignant newspaper columns. Are You Kidding Me?! is a collection of the best examples of the eponymous Chronicle Herald column. This book is a sure thing. You'll laugh. You'll cry. And the best thing? You can read a whole column in five minutes flat!

You may remember Jaime Burnet from those bygone days when she worked at Venus Envy and sang for punk band Eekum Seekum. But recently, she's been busy practicing labour and human rights law at Pink Larkin and writing queer literary fiction. Crocuses Hatch from Snow is Burnet's debut novel—and it's a must read. Burnet introduces readers to a cast of characters that rivals an Atom Egoyan film: There's a body-piercer, a grieving widower, a young woman in love, a grandmother suffering from Alzheimer's and a Mi'kmaw survivor of the residential school system. These characters' lives intersect in a story about history, obsession, and gentrification set in the north end of Halifax. If that's not enough of a reason to go grab this book as soon as it's released, how about this: One of the characters has an affair with a ghost.

Calling all art lovers: This book is for you! Eyelevel is Halifax's long-running, not-for-profit, artist-run centre dedicated to contemporary art. This month, it's releasing a self-published multimedia art collection in book form. Sitelines combines case studies written by gallery staff with commissioned works by Halifax artists. Inside, you'll find contributions from local notables including (among others) craft maven Julie Hollenbach and writer/filmmaker/artist Francesca Ekwuyasi. At only five by eight inches and 66 pages, this neat little art book needn't be confined to coffee tables.

Morgan Murray lives in Cape Breton with his wife—the talented cartoonist Kate Beaton, who is best known for the webcomic Hark! A Vagrant—daughter and dog. Dirty Birds is his first novel. It's the story of a mediocre young man from Bellybutton, Saskatchewan who heads to Montreal in search of that coveted big-city life. Dirty Birds won't be released until Halloween, but it's already won critical acclaim: Scotiabank Giller Prize-winner Will Ferguson compared Murray to Kurt Vonnegut. At a whopping 432 pages, this book is approximately 200 pages longer than Slaughterhouse-Five—certainly not light as the proverbial feather—but it does share the straightforward realism and black humour characteristic of Vonnegut's novels. Make the time to pick it up and settle down with what might well become a contemporary Canadian classic.