The venerable gallery has a venue again, but plans to hold onto some of the tenets of spacelessness. 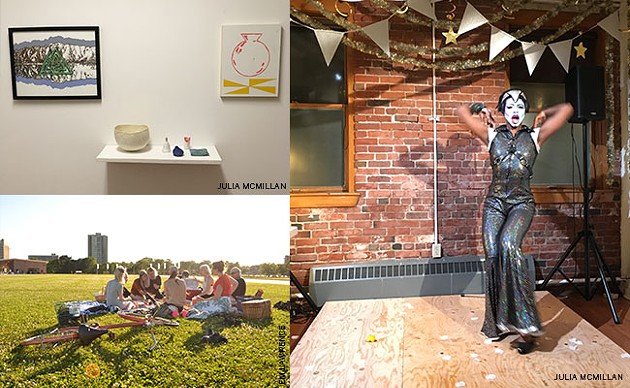 Artwork by Katherine Nakaska, Sam Kinsley, Helah Cooper and Kyle Martell at Silver and Gold 2018, Joee performing at Silver and Gold 2018’s drag show, Eyelevel’s Food for Thoughts picnic on  the Common in 2016.
The last few years have seen some serious redesigns for Halifax's artist-run centres. Around the same time that the Khyber was pushed out of its home on Barrington Street, Eyelevel Gallery—one of Canada's oldest artist-run centres—also moved out of its space downtown, due to high rent costs. The Eyelevel board and then-director Katie Belcher took this as an opportunity to work within an experimental model: A spaceless centre that would facilitate projects offsite.

Just last month, Eyelevel moved once again—across the hall from its former office on Cornwallis Street—and now finds itself in a space with room for exhibitions and an artist's studio. Though McMillan is excited about the opportunities for the events and programming that this new space offers, she says Eyelevel is not quite ready to let go of some of its spaceless initiatives.

"I wanted to see how we could adopt the tenets of spacelessness, which are promoting, encouraging and facilitating projects that are a little bit more experimental, a little bit more research-based, a little bit more" geared to supporting an artist's practice growing, she says, "rather than a final project, while also fostering a gathering space."

She describes an artist run-centre as a community centre—a YMCA for artists—whose job is respond to its community's needs. In this case, this means exhibition and studio space, the latter of which is becoming increasingly difficult to find in the city. Many artists, like arts spaces and organizations, are finding themselves priced out of studio space, or seeing their buildings sold or torn down. "Finding a gathering space is hard, so being able to hold a space for people has some radical potential in and of itself," says McMillan.

Eyelevel christened its new space last month with Silver and Gold, its annual fundraiser and art auction, featuring the special addition of a drag show. "It was a really crammed, sweaty dance party," McMillan says, describing a glittery crowd gathered in the narrow room. "It was so fun—I think it was special to make it a very queer event from the get go, that felt really good to me in my queer little heart.

"It activated a whole different artistic community," she continues. "This kind of cross-pollination is exactly the kind of thing I'd like to see Eyelevel doing."

True to this sentiment, Eyelevel's programming for 2018 includes collaborations with the Museum of Natural History and Saint Mary's University Art Gallery, as well as podcasts and providing low-cost studio space. "I'm always surprised by how much support ARCs get from the community. The support network is so much larger than I see on a day to day basis," says McMillan. "It takes a village."