Businesses are closing and buildings are coming down in the heart of downtown. 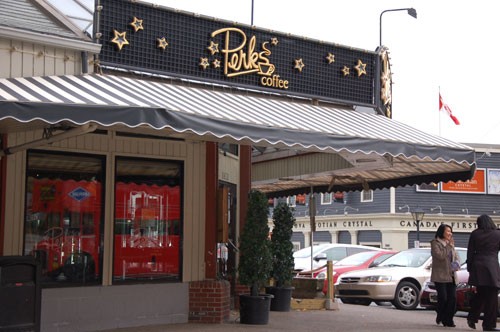 Perks Coffee next to the Halifax ferry terminal was closed abruptly Tuesday afternoon when a bailiff from the sheriff's department showed up with an eviction order, says Perks owner Marshia Inkpen, who Wednesday was seeking a court order to quash the eviction.

As of press time Wednesday, landlord Michel Lindthaler hasn't returned a call for comment, and the coffee house remains closed. We'll let the situation play out on our online Shoptalk section.

Historic Properties: business Closings
Next door, at Historic Properties, Just Us and Loaf and Ladle closed operations earlier this month after employees complained of "a strong chemical odour that resulted in symptoms including sore throat, headaches, nausea, fatigue and disorientation," according to a report written by Shelley Gray, an inspector with the provincial labour and workforce development department.

Gray could not find a definitive source for the smell, but noted several possibilities: cleaning agents used in the nearby women's washroom, sewer gasses backing up through a grease trap and rats in an adjacent pump room. She issued three orders to Armour Group Limited, landlord at Historic Properties; the firm must seal pipes in a dish pit area, implement a pest management program and monitor carbon dioxide levels in the mall.

Mike Foster, Armour's manager of the property, declined to comment. The chemical smell was still noticeable Monday afternoon. The work is to by completed by November 9. 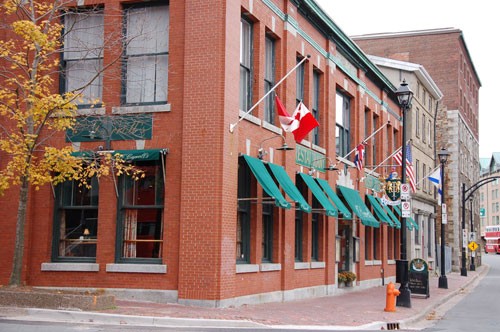 O'Carrolls: to be gutted
Armour is also poised to begin razing the buildings across the street from Historic Properties to make way for construction of the controversial Waterside Centre development. Demolition workers were on site Monday, and O'Carroll's Restaurant and Irish Pub will close this weekend.

The Tim Hortons on Barrington at Sackville is closing this weekend as well, reportedly due in part to an oil spill in the basement.

Roy Building: to be gutted.
And councillor Dawn Sloane confirms that Lou Reznick, owner of several Barrington Street properties, will bring his proposal for the Roy Building before city council in November. Reznick wants to tear down the Roy, with the exception of its facade, and erect a 17-storey building in its stead.

Reznick also owns the old Sam the Record Man building across the street. The rear of that property has been leased by for the rear atrium section of Victor Syperek's Economy Shoe Shop. "He doesn't seem to know what he wants to do with the space," says Syperek of Reznick. "He won't sign a lease so our hands are tied."

Syperek, whose business is under creditor protection by order of the bankruptcy court (The Coast remains a creditor), is closing the atrium and putting his efforts into renovating the rest of the Shoe.

Herald Building: to be demolished
Lastly, one block up, workers are preparing for the demolition of the old Chronicle-Herald building. Expect it to start coming down within the next month.