Everything Scotiabank got for buying the Metro Centre's name

They're richer than we thought.

How long ago last summer seems. Twelve months past, it was all the news could talk about when Scotiabank bought up the naming rights for what we then called the Halifax Metro Centre. It was a 10-year, $6.5-million agreement with HRM which will help fund major capital upgrades. Six months after being announced, the contract was actually signed. A few months after that, The Coast finally received a copy.

Capital upgrades like new washrooms and seats will need an estimated $5.7 million out of the total sum Scotiabank is paying (an amount closer to $7.5 million, with an annual three percent escalator). The rest of the money is being applied to “advertising and sponsorship properties.”

Some of the leftover money was spent this past year rebranding all of Metro Centre’s uniforms, letterheads, signs, business cards and other miscellanea. Scotiabank originally wanted their logo on wheelchairs and ladders too, but dropped that requirement. The remainder helps compensate Trade Centre Ltd.’s lost advertising revenue. From what I’ve been told, upwards of $100,000 was previously pulled in from the premium ad spaces now unable to be sold because they’re slapped with a Scotiabank logo.

In return for the cash, Scotiabank gets its brand splattered everywhere and is granted exclusivity within the building in terms of banking and financial services. That’s resulted in two primary changes: Scotiabank installing its own ABMs, and the Mooseheads dropping BMO Bank of Montreal as a sponsor.

Halifax’s hockey team had been sponsored by BMO since 2009, but the Metro Centre’s naming agreement made it a foregone conclusion the Mooseheads wouldn’t re-up that contract when it expired this past spring. No one explicitly told the Mooseheads they had to drop BMO and go with Scotiabank, but that’s effectively what happened.

“This was all part of the whole naming rights thing,” says Travis Kennedy, vice-president of corporate relations for the Halifax Moose-heads. “If they had the building, it makes sense they’d want the team as well.”

“The arrangement with Scotiabank displays tremendous flexibility on everyone’s part by allowing a competitor of Scotiabank to continue its sponsorship of the Mooseheads until that financial institution’s contract with the team expires,” writes Halifax spokesperson Brendan Elliott over email.

Still, that flexibility created some awkward advertising anachronisms over the past year—like BMO’s mascot skating around Scotiabank-branded ice, or the continued existence of BMO’s Halifax Mooseheads Mastercard. 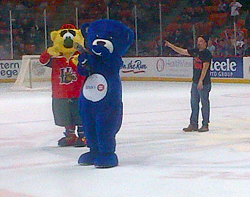 Since it had to put up with BMO on its turf for the last 12 months, the city is compensating Scotiabank with some first-year in-kind benefits (such as discounted advertising rates and a few special promotions).

What else does the bank get? Among other assorted perks, the LED board outside the arena will play 100 10-second Scotiabank commercials a day. The Metro Centre Premium Seating area becomes the Scotiabank Premium Seating Area. The bank also secured the right to upgrade its previous skybox “to a more prominent and desirable location at the earliest available opportunity.”

Last but not least, three Scotiabank automated banking machines have replaced any previous ABMs inside the Metro Centre. The machines were part of the original “verbal commitments” from HRM, but it took until November for someone at Scotiabank to notice they weren’t mentioned in the contract. Adding in the appropriate clause took another month. The machines “may add a convenience fee on transactions by non-Scotiabank customers.” Last I checked, that was $3 per withdrawal.

The agreement itself took longer to sign than both parties lawyer had hoped, according to internal emails. The original timeline was to have ink dried before the start of hockey season in September. In fact, the contract wasn’t finalized until late December. That’s no one’s fault, says Brendan Elliott, but a factor of the magnitude of the deal. Elliott maintains the delays didn’t change any outcomes, and HRM made the announcement as soon as was possibly last summer in the interest of full transparency.

Full transparency is limited, though, by the nature of the agreement. Several passages in the contract (which you can read below) remain redacted. Some of those are under solicitor-client privilege, while other sections could “harm the financial or economic interest of the municipality” or reveal “commercial, financial, labour relations, scientific or technical information” that could harm the competitive position of a third party.

“The approach taken by the municipality in disclosing information to the public regarding the naming rights contract with Scotiabank will serve as a model or template moving forward,” writes Elliott. “It balances the need to be transparent while protecting proprietary information belonging to the private business partner.”

There’s a learning curve, for these kinda of deal The Scotiabank Centre was a successful test run—the first step towards selling off the naming rights to many more municipal properties. Just keep an eye on those hidden fees.

Everything else Scotiabank bought

-A Scotiabank Centre logo on Brunswick and Duke Streets. Another logo to be displayed on the corner, over the digital screen, and a “Welcome to Scotiabank Centre” banner hanging over the south side entrance. Plus, wraps on signage on all exterior entrance doors.

-Interior signage includes scoreboard branding (plus a backlit sign on all four sides), a “prominent north-end banner,” around the in-ice logo on the face-off circle, an on court logo for basketball games and inside the security tunnel where players exit.

-One hundred 10-second Scotiabank commercials played every day on the exterior LED board.

-A Scotiabank “insert” can be placed inside Ticket Atlantic envelopes distributed at the Scotiabank Centre for two months out of every year.

-Internal emails tell how the Scotiabank logo was originally to appear on many more items, including capacity signs, wheelchairs, ladders, the security office and bulletin boards. “Generic areas back of house that have no real value,” reads a September 16 email from an unidentified Scotiabank party, describing why the bank no longer needed to brand those assets.

-The bank received the right to upgrade their current skybox suit to a “more prominent and desirable location at the earliest available opportunity at no additional cost.”

-The exclusive rights to install and maintain three bank machines within the facility (with the option for more if the city agrees). The machines may add a convenience fee (of Scotiabank’s complete control) on transactions by non-Scotiabank customers.

-Two “community programming” events each year can be conducted by Scotiabank at the centre.

-If a major event renting the Centre is sponsored by another bank or financial services company, HRM agrees to offer Scotiabank additional sponsorship benefits, “the value and type to be discussed and agreed by the parties.”

-The arena logo can’t be granted to any illegal activity or anything within the adult film industry.

-Halifax will pay the cost of covering and restoring any “camera-visible” Scotiabank signs that need to be covered for “nationally-televised events.”

-The naming rights will last for 10 years. Scotiabank can negotiate for a new term within six months of the end date. Halifax can’t negotiate with any other entities during that time.

-The municipality will not “directly or indirectly attempt to dilute the value of the goodwill attached to any of the Scotiabank trademarks.”

-The Scotiabank logo will appear on anything that would normally bear the name of the arena, including but not limited to event tickets, promo materials, merchandise “and other sundry items that would be issued to the public.”

-Halifax can not, unless given approval, use or associate the Scotiabank trademark with any programs, operations or facilities other than the Centre.

-Should the contract be terminated at any time, HRM is responsible for all costs in removing the signage inside and out.

-Halifax has to refer to the arena as the Scotiabank Centre in all public facing media.