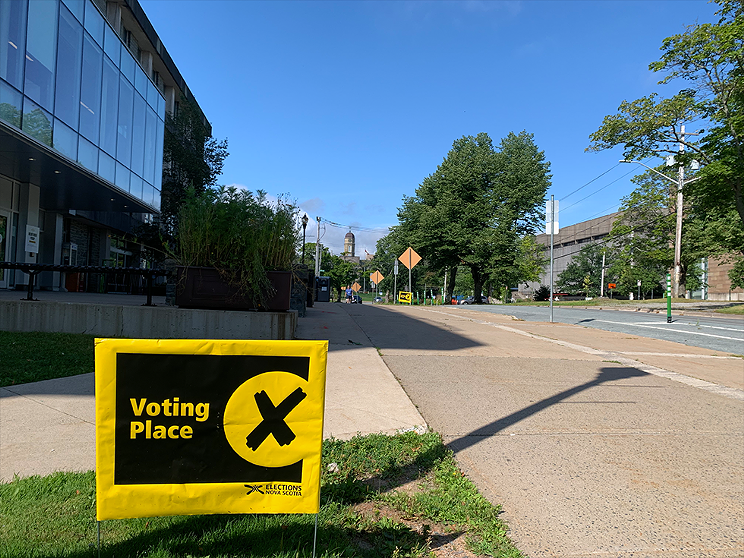 THE COAST
An early polling station at the Dalhousie University Student Union building.

With the summertime election call, student organizations have been hard at work encouraging the nearly 60,000 people studying in Nova Scotia to get out and vote under stranger-than-normal circumstances.

The Canadian Federation of Students is highlighting election issues like tuition costs, climate change and tackling racism in a non-partisan campaign to encourage student votes.

Halifax Regional Councillors share their biggest concerns for the provincial election: Here’s what your city councillor thinks the next NS government should make a priority.

How Facebook is interfering to prevent interference in the NS election: Its main focuses are preventing misinformation and ensuring political ads are labelled.

“It also means putting us on a path toward climate justice and taking action to address racism and colonialism.”

While students may or may not be in Nova Scotia on August 17 to cast their vote, Reppas and his colleagues have been working on a Vote for The Future campaign to inform students how to vote and highlight issues worth questioning candidates on.

Students Nova Scotia, meanwhile, has partnered with Elections Nova Scotia for its Get Out the Vote campaign, which offers resources for voting and asks students to pledge to hit the ballot box.

Any Canadian citizen who has been living in Nova Scotia for at least six consecutive months can vote in the election. Voting for students can happen early through mail-in ballots for those out of town, at any polling station until August 14, or in the student’s assigned polling station on election day (which, FYI, is Aug 17). Permanent residents, however, are not permitted to vote.

"Of course, this does leave out many students, including international students and out-of-province students who have not resided in Nova Scotia for at least the six months,” Reppas says.

For those who can’t vote, CFS encourages political action through community outreach or volunteering “to ensure students’ issues are prioritized this election.”

It’s unclear how many students voted in the 2017 NS general election. Elections Nova Scotia doesn’t track student votes, just ages of registered voters. The last election had 55,400 registered electors between 18 and 24 years-old. This represents about 72% of that age-group’s population, compared to 57% in the 2013 election.

An Elections NS report from 2017 says this youngest age group is underrepresented at the polls compared to older residents—100 percent of Nova Scotians 25 and older were registered to vote in 2017. That year also saw the province’s lowest voter turnout rate since 1960.