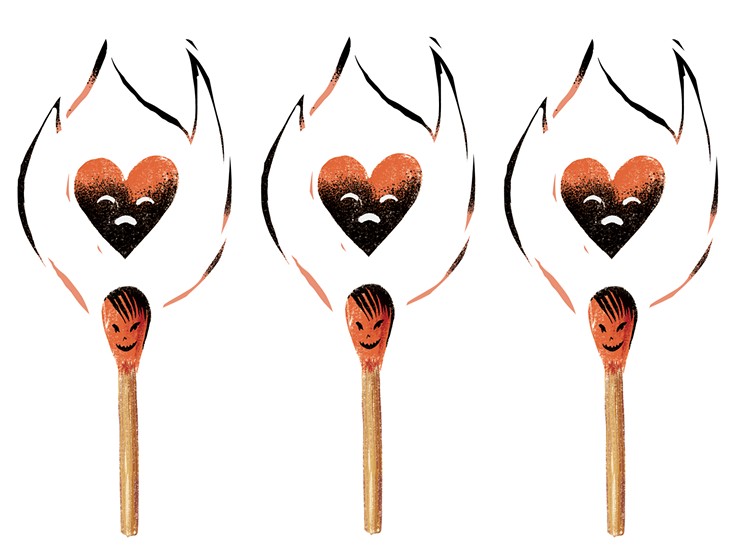 Joe Newton
As Richard Needham said, “People who are brutally honest generally enjoy the brutality more than the honesty.”

If you need a therapist after sex with someone, maybe that person shouldn’t be in your life.

QI'm a 19-year-old girl who was dumped few months ago. My partner found out he didn't like my body when we were having sex for the first time, and he told me right after. We were actually still in bed naked when he told me. He kept cuddling me to make me feel a bit better but it still hurt to hear. Other than slight doubts about genitals and my face (I have Asian features, and having my face and living in a western country isn't always easy), I didn’t go into that experience expecting to be rejected.

We had talked about all the sexual stuff we wanted to do, and he had previously told me I was attractive and thicc and paid me other compliments. Undressing for someone and then being rejected was devastating, and I don't have other experiences to weigh this one against and take reassurance from. My self-esteem dropped. I know his tastes and preferences shouldn't be a problem for me now, since we are no longer together, but I can't stop thinking about them.

I've known him for five years. He means a lot to me and we want to continue to be friends. I wish someone had told me that having sex with someone isn't a guarantee that everything will always work out. (Having sex with them, being sexually open and generous, and having nice tits, too!) I started therapy but I also wanted some advice from you. —Babe Only Desires Intuitive Emotional Support

A“People who are brutally honest generally enjoy the brutality more than the honesty.” The late Canadian humourist and newspaper columnist Richard Needham wasn’t talking about your ex-whatever-he-was when he made that observation, BODIES, but he could’ve been.

Yeah, yeah: Sometimes we only realize we aren’t as attracted to someone as we thought until after we’ve slept with that person. That’s sadly the case sometimes. But your ex-whatever’s comments were so gratuitously cruel, BODIES, that it’s hard to avoid concluding (if I may borrow a phrase) that cruelty was the point. He could’ve and should’ve given you a million other reasons why he didn’t want to sleep with you again—this may be one of those rare instances where ghosting would’ve been kinder. At the very least he should’ve given you a chance to get dressed before he let you know he wasn’t interested in having sex with you again.

That your very first sex partner chose to brutalize you like this—that he didn’t make the slightest effort to spare your feelings—is an almost unforgivable betrayal. Unless this boy is somewhere on the spectrum and has difficultly anticipating how a direct statement might hurt another person’s feelings, BODIES, there’s no excuse for what he did. Sticking around to cuddle after saying that shit isn’t proof he’s a good person. The arsonist who sticks around to piss on your house after setting it on fire isn’t being kind, BODIES, he’s warming his dick by the fire and enjoying the blaze.

Please know that being rejected by someone doesn’t mean there’s anything wrong with your body, or with your genitals or your face or your race or your features. Swiping right on someone who didn’t swipe right on you or sleeping with someone who doesn’t want to sleep with you again isn’t proof you’re flawed or unattractive. It just means you’re not right for that particular person, BODIES, and for reasons particular to that person.

If you had to get a therapist after sleeping with someone, it’s a pretty good indication that person should have no place in your life—as a lover or a friend—going forward. Keep seeing your shrink, BODIES, and stop talking to this asshole.

This week on the Lovecast, a bi woman wants to try threeways with her boyfriend. He enthusiastically agrees. But it's been a while since she's been with a woman, and wants to have a trial run with just her unicorn.
QI’ve gone through many variations of relationships, from monogamous to open. My new partner is incredibly smart, open-minded, loving, GGG—all the things, right? So, I find myself a bit perplexed and troubled by a statement she made. She was in a relationship prior to the one with me, and the person she was with wanted to be free to do as he wished sexually. She told him that was “fine” so long as he used protection and she didn’t know about it. Apparently that worked so well for her that she made me the same offer after we decided to become sexually exclusive: she told me to use protection if I should ever cheat and not to tell her about it.

At first I was like, “Cool, but I’m not going to cheat,” but now I find myself thinking about it. And if I do cheat I will use protection and keep it to myself, per her request. So why am I writing to you? I have a high sex drive and a history of parental neglect and abuse. I find that I seek validation from women and I have a fairly good idea that it's due to what I endured from my mother. We’ve only been seeing each other for a few months since we have been dating and I do love her. I know people often get caught—even with a hall pass—and I don’t want to lose her because of this. I want to make peace with never being with another person or with using the “hall pass” I’ve been given. How do I do that? —Hesitant About Lying Lest Partner’s Anger Sabotages Situation

AYou can make all the peace you want with being monogamous, HALLPASS, but that won’t make being monogamous any easier for you. Zooming out for a second: Your desire to have sex with more than one person might have something to do with the trauma you suffered in childhood…or it might not.

A lot of people have high sex drives and risk-taking personalities and a desire for variety, and not all of them were neglected or abused as children. But the culture encourages people who don’t wanna be monogamous (that’s a lot of people) or who find monogamy difficult (that’s everybody else) to see themselves as damaged. And yet we’re told that monogamy is always easy for people who are emotionally healthy—which is a lie—and then we waste time digging through our childhood histories for something that might explain why this thing that’s supposed to be easy—monogamy—is so hard for us. (Spoiler: it’s hard for almost everyone.)

It’s a waste of time, HALLPASS. You can and should see a therapist to help you work through the trauma you suffered as a child, of course, but don’t waste your time with a therapist who pathologizes your relatively normal desires or seeks to assign blame for them.

So what do you do about your girlfriend? How about you…maybe…talk to her?

Your new girlfriend has been perfectly clear—she doesn’t care if you cheat so long as you use protection and she doesn’t find out about it—but you need additional clarity. If you were to sleep with someone else and she found out about it despite your best efforts to prevent her from finding out about it…what then?

If finding out you used the hall pass she gave you is something she couldn’t forgive, HALLPASS, then you obviously can’t use it without risking the relationship. (You’re right: people get caught.) Additionally, if that’s really how she feels, then your girlfriend shouldn’t be handing out hall passes in the first place. But if cheating is something she could tolerate—so long as protection was used and some consideration was shown for her feelings, i.e. you at least attempted to be discreet/keep it from her—then you don’t have to hand in that hall pass.