Elements’ brand new locally inspired menu is a good start, but there is still a ways to go before it all runs smoothly, says Kristen Pickett. 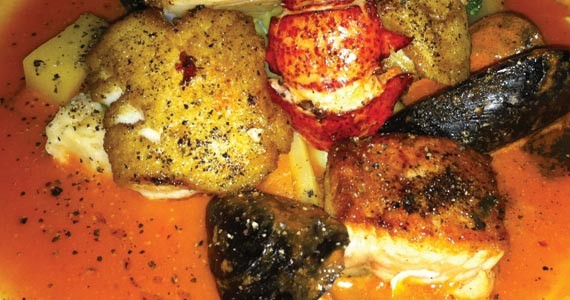 Kristen Pickett
The seafood stew is a keeper.

We head into Elements Restaurant in the Westin at 7pm on Wednesday. It's not full, but there are enough tables to create a pleasant hum of chatter. The resto is newly renovated---gone are the dated tables and chairs, carpets and fixtures in favour of a more modern decor. It's a fresh appearance for a restaurant all about fresh product: Elements just recently announced a goal of sourcing as much product as possible from within a 50-mile radius. (The Seaport Farmers' Market is practically in its backyard.)

As we look over the menu, our server approaches with a tin can concealing a lovely rosemary-brioche bun. It's tasty, a nice change from a generic bread basket. We decide on two appetizers with the intention to share. I choose the open-faced beef cheek ravioli in a spicy tomato sauce ($9), while my friend opts for the Indian Point mussels ($10).

The ravioli is fantastically presented with layers of the beef, roasted tomato, creamy ricotta, kale and tender sheets of fresh pasta. The flavours work wonderfully together, but the gutsy move of including (fibrous) kale in the dish doesn't quite work for me. I don't find the tomato sauce particularly spicy either. The mussels are served in a broth of L'Acadie Blanc, garlic and herbs and all but one have opened. I'm impressed; I often have to discard at least four to an order in other establishments. My friend enjoys them, but they're a bit salty for my taste.

We take a break between courses to digest; we've ordered two mains as well. My seafood stew ($27) consists of two pieces of haddock, salmon, a scallop, two mussels and a piece of lobster. The seafood is served with steamed vegetables on a bed of celeriac puree and topped with a tomato broth. It's delicious. The puree is creamy and a nice alternative to potato, while the broth's flavour is vibrant and fresh. The haddock and salmon are cooked perfectly, but the shellfish is on the chewy side.

My friend's double cut pork chop ($24) is fantastic---so much so that I'm slightly envious. The chop is succulent, but it's the dish's other elements that reel me in. I'm not normally a fan of sweet with meat, but the sauce---a Tideview Cider jus---is just the right mix of tart and tangy to complement the pork. The subtle flavour of the celeriac mash is a nice contrast to the accompanying rhubarb relish.

I don't think I can eat another morsel, but my friend is indulging in dessert and twists my rubber arm. I decide on the Quark cheesecake with caramelized apple relish and shortbread crumbs ($8), while he chooses the Garrison Nut Brown beer brownie ($8). My dish isn't particularly cheesecake-like in consistency, but it's good. With a touch of sweet lemon, it's a light dessert option after such a filling meal. It's hard to mess up a brownie, but it's not easy to make one this good either, served warm in a Garrison beer stein topped with heavy cream and a malted caramel that takes on an almost marshmallow-y note. I eat more of his dessert than my own.

As we leave Elements, both of us filled to the brim, I'm happy to see another restaurant (a hotel one at that) announce its dedication to local products. There are a few kinks to the meal---the seasonings and cook times could use a review---but the service is impeccable, in a manner that's formal without being stuffy.

We agree that the makeover, both in the front and back of the house, is exactly what this restaurant needed---and with those elements already in place, the kinks should be ironed out in no time.

Speaking of Elements , Elements On Hollis