So far in this dishwater dull campaign, there hasn’t been any defining moment , let alone memorable ones. 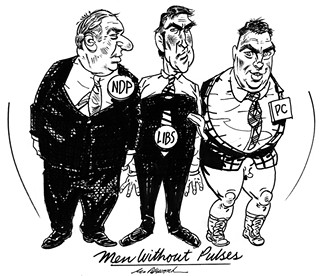 Every election needs its defining moment---its too-big-foot-in-too-small-mouth moment, its searing, snapshot flash-of-insight moment, its accidental, incidental larger-than-life moment that suddenly careens the campaign off in an unpredictable direction toward some unknowable destination.

So far, we have not, needless to say, had any such moment in this blandest of beige provincial election campaigns.

There certainly have been defining moments in elections past, however.

Remember 1998 when, during a televised debate, supposed third-party also-ran Tory leader John Hamm asked Liberal premier Russell MacLellan if he would resign if he didn't balance the books.

Uh...MacLellan stared silently into the camera for... an... excruciating...seven...endless...seconds. Though he would later claim he was expecting the moderator to enforce a rule against candidates asking each other questions, the silence made MacLellan look anything but leader-like. His majority melted faster than snow in July.

The next year, with the Opposition NDP sniffing the possibility of power for the first time ever, its bright young leader, Robert Chisholm, tripped and fell over what was, in truth, a throwaway question. As part of its attempt to humanize the leaders, the Halifax Daily News had asked each one a bunch of puffball personal questions---"boxers or briefs," etc.---including one about whether the candidate had ever been convicted of a criminal offence.

Like his rivals, NDP leader Chisholm quickly offered the expected "no" answer to the question. But then, voila, a few days later, the proverbial brown envelope arrived with evidence that Chisholm had been less than forthright. As a young man, he'd been convicted of driving under the influence. Although Chisholm very humanly claimed he'd fudged his answer because he didn't want his daughter to find out about his youthful indiscretion, he was political toast. The NDP lost the election and, soon after, Chisholm quit as leader.

The important thing about such defining moments is that they don't have to be about anything substantial, or even to have really happened at all, in order to worm their way into the public consciousness for all time.

Take Kim Campbell, Brian Mulroney's now-you-see-her-now-you-don't successor as prime minister. She will always be remembered for launching the 1993 federal campaign with the dismissive argument that "elections are no place to discuss serious issues." Though that was apparently just a journalist's paraphrase of a much more nuanced answer to the effect that discussing a complete overhaul of Canada's social policies in all their complexities simply could not be done in just the 47 days of an election campaign, Campbell was already well on her way to the worst electoral collapse in Canadian political history.

The man who also deserves some credit for taking the air out of Campbell's tires, Brian Mulroney, enjoyed his own deceptive defining moment nearly a decade earlier. During the 1984 federal election campaign debate, Mulroney sternly informed Liberal prime minister John Turner that he didn't have to go along with Pierre Trudeau's retirement-day appointment of a bunch of Liberal hacks to public sector positions. "You had a choice, sir," he pontificated.

Mulroney's ostensibly principled pronouncement may have won him votes, but the reality, as we now know all too well, is that Lyin' Brian himself ran one of the most patronage-riddled administrations in Canadian history.

And so it goes.

So far in this dishwater dull campaign, there hasn't been any moment defining, let alone memorable.

There's still time, of course---a full two-and-a-half weeks' worth of campaigning and another TV debate to provide something, anything worth remembering about thiscampaign.